The Hollywood Reporter law blog reports that the Second Circuit has rejected claims by Robert Cabell that Adam Sandler, and the other people responsible for the film "You Don't Mess With the Zohan," stole Cabell's idea.

We now know that the answer to the question "how many people are willing to claim the idea of a crime-fighting hairdresser who uses a blow-dryer as a weapon" is "at least two."

Cabell is the author of a 2005 comic book and 2007 novel both called "The Hair-Raising Adventures of Jayms Blonde," which appear to tell the story of a hairdresser/environmental activist who travels the globe trying to save it from "bad hair and bad air."

Sandler appeared in the 2008 movie, "You Don't Mess With the Zohan," which appears to tell the story of an Israeli commando who fakes his own death so he can move to the US and become a hairdresser. (I say "appear[s]" because this is really more than I ever wanted to know about either work.) Actually, I probably should have just given you the headnote from the district court's opinion last year, which will also explain why that court found that "Zohan" did not infringe: 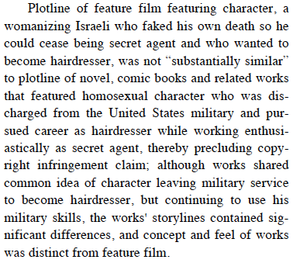 As you can see, although the stories do share certain elements, they are (or at least appear) very different in other ways.

The Second Circuit agreed that the comparison showed only similar ideas, and ideas can't be copyrighted – only the form in which they are expressed can be entitled to protection:

Aside from the unprotectable ideas of (1) brandishing a blow dryer as a weapon, and (2) the character's fighting poses," the court held, there is no plausible basis for a reasonable jury to find that the parties' respective expressions of the concept of a crime-fighting hairdresser are substantially similar….[See] Mattel, Inc. v. Azrak-Hamway Int'l, Inc. … (2d Cir. 1983) (holding that "superhuman muscleman crouching in what since Neanderthal times has been a traditional fighting pose" was unprotectable idea).

In this case, the Second Circuit apparently did not find it necessary to examine the record going back to Neanderthal times, and for the most part simply adopted the district court's opinion, which is also pretty good (see, e.g., "[a]n average lay observer would not mistake Zohan's escapades with his elderly female clients for any of Blonde's amorous activities.")

Apart from the possible emotional-distress claim I may have now that I know "Zohan" took in something like $200 million, this ruling will probably bring an end to the matter.

Manitowoc Should Be Ashamed of This Planking Prosecution

FYI, the Secretary of the Treasury is Not “Moe Money”