Quick flashback to Blagojevich I (from a July 2010 post): 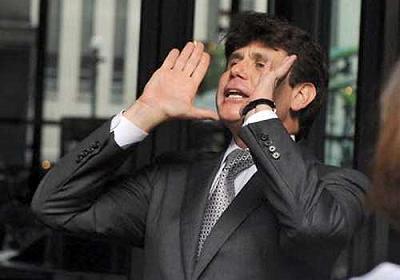 "Rod Blagojevich yells his innocence as he comes out of
federal court Thursday afternoon." (Chicago Sun-Times)

I'd like to think that each of the Blagojevich II jurors struck the same pose as he or she was polled about the verdict last week, but if so they weren't yelling the same thing.

Blagojevich was convicted of 17 of the 20 counts against him, at the conclusion of a retrial in which, unlike last year, he took the stand. In fact, he stayed on it for seven days, thoroughly ignoring the first (and I think only) rule that somebody stuck in a hole is supposed to remember.

The former governor's mouth appeared to have cut a plea deal with prosecutors, because the jurors clearly believed that it had played a major role in convicting the person it was attached to. For example, jurors said Blagojevich's testimony was:

None of which are helpful.

Also, manipulative. According to the forewoman, Blagojevich's efforts to connect with individual members of the jury were pretty transparent. For example, he testified about libraries, Boston, the importance of education and his interest in music, none of which seems relevant to his defense unless you know the jury included a librarian, a Red Sox fan, a teacher and a choral director. Since the jurors did know that, it was obvious he was targeting them, and this strategy backfired.

Blagojevich has not been sentenced yet, but since he could theoretically get 20 years for each of the 17 counts (though each sentence will likely run concurrently), during that hearing he might want to keep quiet.

Alan Simpson on the Deficit: “Give Them the Green Weenie”