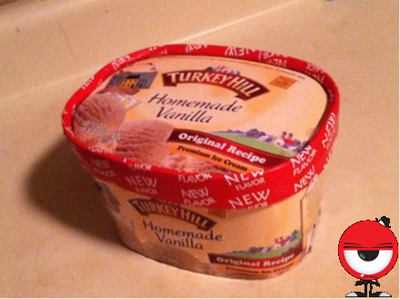 The Consumerist is concerned that reading this label might trap a consumer's mind in an infinite logic loop (those who have had trouble with other labels are urged to look away), and/or that a consumer opening the box might find Schrödinger's Cat inside.

What they really mean by the latter, of course, is that while the box is closed, the ice cream inside exists in a quantum superposition of states in which it is both "original recipe" and "new flavor," and only when the box is opened and the ice cream observed does the wave function collapse into either an "original" or "new" state. Alternatively, the two states would decohere and two new universes would form, in one of which you are eating original-recipe ice cream and in the other a parallel You is enjoying the new flavor. (I don't think there's any scenario in which a cat spontaneously forms. Please!)

Either way, a consumer shouldn't be able to sue because at the time of the purchase, when reliance occurs, there is no contradiction — both of the label statements are true until and unless the box is opened. (Although, if you are a plaintiff's attorney, I guess you could argue they are also both false.)

Please let me know if you are interested in serving as an expert witness for a possible quantum-physics defense to consumer-law claims involving allegedly self-contradictory labels.

Is an Alligator a “Deadly Weapon”?

Texas Candidate Says Former Life as Prostitute is Behind Him