Here's an excellent question (via the Legal Satyricon): if a monkey steals your camera and takes a bunch of pictures with it, who (if anyone) owns the rights to the pictures?

After three days of hanging out with some crested black macaques in Indonesia, photographer David Slater walked away from his camera tripod for a minute and one of the monkeys started playing around with the equipment. Eventually he hit the button, and the monkeys all enjoyed the noise so much that he kept hitting it. Slater said the monkey had taken "hundreds" of pictures by the time he got his camera back. Probably most were no good (neither are most of mine), but there were also some utterly hilarious self-portraits like this one.

These have been getting a lot of attention this week, for obvious reasons, but a couple of people have now pointed out the troubling legal issue here: 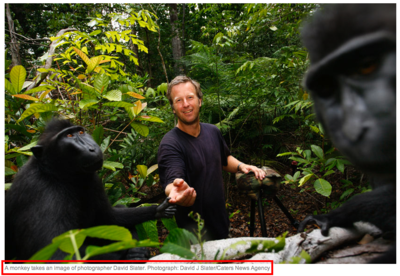 A monkey takes an image …

… but a human takes the credit. How does that work?

As the U.S. Copyright Office summarizes it here (PDF), copyright exists automatically "from the time the work is created in fixed form [digital works count]. The copyright in the work of authorship immediately becomes the property of the author who created the work. Only the author or those deriving their rights through the author can rightfully claim copyright." Emphasis added.

Since Slater didn't take the pictures, I don't think he can be the "author." And unless he got the monkey's consent in writing, I don't think he has any rights through the author. If this had been a "work for hire," then the employer would own the rights, but this monkey was clearly a freelancer. I suppose non-human primates probably can't own intellectual property, although underage humans can, and that's a pretty fine line as far as I'm concerned. But even if the monkey doesn't have the rights, that doesn't mean Slater or the news agency has them. Maybe all works of monkey art are in the public domain!

Well, this isn't my field, although as usual that hasn't stopped me from speculating. If you know the answer – if there is an answer – let me know. You'll probably have to represent the monkey pro bono, but it'd be worth it.

Update: Marc Randazza had the idea that this might be the one situation where the Righthaven copyright trolls actually own something, but now believes that model would not work, either. More to come.