An elaborate and yet also stupid scheme to extort money from a potato-chip bakery in Ohio failed this week when police were able to track the payoff money to a suspect after dropping it off as instructed. Their strategy: watch for the bucket to move, and then follow the attached fishing line back to the person trying to reel it in.

This is what we lawyers refer to as "a strong circumstantial case."

Grippo's Potato Chip Company reported that someone had broken into its plant and stolen some files, checks and other documents. The burglar left a note demanding that $22,000 in $100 bills be put into a bucket behind a vacant grocery store, or else he would destroy the documents and also release personal information contained in them. The company suspected the burglar was an ex-employee who knew the position of security cameras because he had been able to avoid them during the heist, and quickly came up with a name.

The drama then shifted to the scene of the dropoff, and this nearby wooded area. 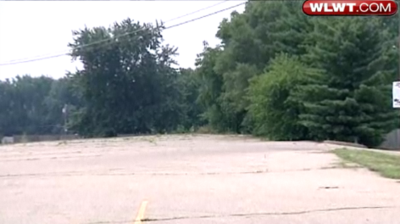 The Nearby Wooded Area

Officers set up a cordon around the area, and fake money was placed in the bucket. After a short delay, the bucket started to move in the direction of the woods. Having previously noticed, presumably, that there was fishing line attached to said bucket and that it led off into said woods, the authorities were well-positioned to make the arrest of the person at the other end.

Of course, just because you're the guy holding the fishing pole doesn't mean you're responsible for the fish being there to be caught. And this appears to be the suspect's defense, according to Officer Mark Denny. "He happened to be in [that] small wooded area," Denny said the suspect claimed, "and tripped over a piece of fishing line that was attached to the bucket that had the drop in it." Well, if you tripped over a suspicious piece of fishing line in the woods, wouldn't you investigate further? I think any patriotic American would.

Police, though, are said to be "skeptical."