The Maya Archaeology Initiative is fighting back against claims by Kellogg North America that a bird depicted in MAI's logo is too similar to "Toucan Sam," the fictional spokesbird for Froot Loops cereal.

MAI, a non-profit that supports education for Guatemalan children (as well as archaeology), got a cease-and-desist letter from Kellogg's lawyers in July saying that Kellogg was concerned about an application to use the logo in connection with clothing, given that Sam also appears on clothing. Kellogg said it was also concerned about the use of "Mayan imagery" in the mark, saying that Sam also sometimes appeared in a similar setting.

Decide for yourself whether there is a likelihood of confusion: 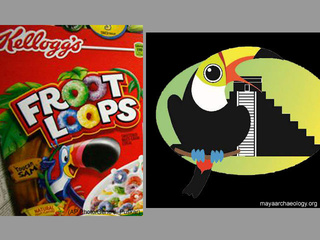 Hint: Sam is on the left.

In a response on behalf of the World Free Press Institute, of which MAI is a part, its counsel provided some background on the organizations and pointed out a few issues with Kellogg's claim.

These are small non-profits, Sarah Mott wrote, that focus on preserving and celebrating the cultural history and heritage of countries around the world, or in MAI's case, of Guatemala. MAI is associated with Dr. Francisco Estrada-Belli, a world-renowned expert on the Maya, and the group works to educate Guatemalans about Maya history and to support Maya archaeology.

On the legal issues, Mott noted the differences between the two toucans, including coloration, beak shape, and the fact that MAI's bird is based on birds that actually exist in nature. Like other such birds, MAI's bird does not have a name. Also, MAI's logo includes a Mayan step pyramid and is egg-shaped, so it is more than just the bird. MAI doesn't plan to sell cereal, and so "[u]nless either of these toucans or their purposes change, there would be no incentive or reason for MAI to associate with Kellogg" and no likelihood of confusion.

Did the Mayans have
Froot Loops first?

As for Kellogg's concern about "Mayan imagery," MAI took exception to that one. Mott said she had looked at Kellogg's websites in an effort to explore this claim. The only imagery she could find that was even "vaguely Mayan," she said, was on the Froot Loops site, which includes a number of "Adventure" games set in various locales. Generic pyramids do appear in one of those, she noted (this one), but there doesn't appear to be anything distinctively Mayan about them. (Unless the Mayans put Froot Loops on their pyramids, I think she has to be right. Even if they did, that might pose other problems for Kellogg's claim.) Worse, the only quasi-Maya depicted there is not depicted favorably:

Disturbingly, the villain in this Kellogg Adventure and its related games — and the only character who is of color [other than the birds] — is a "witch doctor" with a cackling screech. Apparently, he is supposed to be a Maya. At best, this is culturally insensitive. I would characterize it as a demeaning caricature of an advanced and ancient civilization about which your game developers know nothing.

In a press release, Dr. Estrada-Belli characterized Kellogg's claim as "a bit like the Washington Redskins claiming trademark infringement against the National Congress of American Indians."

To be fair to Kellogg, companies do need to be fairly aggressive in defending trademarks against dilution, and it may have intended only to stake out a position for that purpose rather than to go to the mat against a non-profit educational/archaeology group. (Which, by the way, could probably use your support, if you're interested.) I guess we'll find out. The parties are evidently pursuing settlement talks.

For its part, MAI says it "has no present intention of directly challenging Kellogg's disrespectful treatment of Mesoamerican indigenous culture," so that's one bargaining chip Kellogg should probably consider.

Rome Still Having Trouble With Gladiators