This would have been Good Reason to Kill #19, except that it’s not the first Yahtzee-related assault I’ve reported. So I feel compelled to list it as another example of Reason #2.

The previous incident took place in June 2007, when “[a] night of Yahtzee ended with a fatal stabbing” in Tampa, Florida. This one, coincidentally or not, also happened in Florida. According to the report, a woman called police and told them that “while she was trying to play Yahtzee with her husband an argument ensued and she attempted to leave the residence so she could calm down.” He apparently was not very calm, either, because he allegedly pushed her down and choked her. She said she was able to escape to a neighbor’s house, from which she placed the phone call.

There are two sides to any Yahtzee argument, of course (or at least two, anyway), but the husband did not do himself any favors by acting “extremely belligerent and argumentative” when deputies arrived. They seem also to have been skeptical of his story that his wife had simply fallen while walking down the hall. 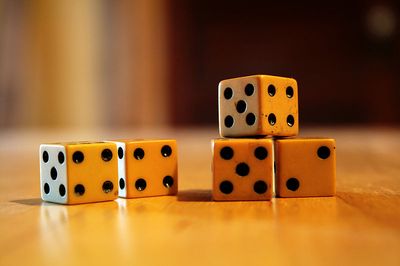 This report, like the earlier one, is unfortunately not specific as to what started the argument. As I speculated before, it is possible, but seems unlikely, that one or both disputes may have been related to the Yahtzee wild-card-rule discrepancy in the original 1956 rules. Not that you wouldn’t try to kill somebody over that, but the discrepancy was addressed in the 1961 re-issue. So unless those in question were playing with an original edition, we would have to look elsewhere to explain the violence.

I notice that the Yahtzee page on Wikipedia has been greatly improved since the last time I looked at it (which I assure you was 2007). Good work, whoever spent their time doing that. There is no mention of the game’s violent reputation, but somebody has done the math necessary to work out all the probabilities involved, and somebody else has actually written a computer program that will choose the correct dice at any point in a game in order to maximize your expected score. Which may be even sadder than the fact that people have actually stabbed each other during Yahtzee-related arguments.

You may be interested to know a few statistics, however. The chance of a Yahtzee (all five dice the same) in any three-roll turn is about 1 in 22. The chance of rolling one right out of the box (or cup) is 1 in 1296. A perfect score in Yahtzee is 1,575, but that would require getting a Yahtzee in all 13 rounds of the game and the odds of that are 1 in 283 quadrillion.

The possible sentence for third-degree felony domestic battery in Florida is 5 years.

New Law Punishes Husbands Who Are “Jealous” or “Indifferent”

A Doughnut Drama in Three Acts