“To smell it is not the same as to see it.” So saith the California Court of Appeal in Robey v. Superior Court, holding that the trial court should have suppressed evidence that a package contained marijuana because the only justification for the search was that the package “reeked.”

The story begins with Robey’s decision to ship a pound of marijuana via Federal Express, which is probably not the best idea even if the package is hermetically sealed. This one was not, because the odor of marijuana was detected by the FedEx employee receiving it. She called police. When an officer walked into the office, “he smelled the distinct odor of marijuana,” and “[a]s he approached the counter where the box was located, the odor became stronger.” The officer seized the box as evidence, presumably having smelled the FedEx employee and counter in order to narrow it down. 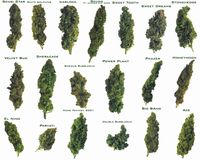 Back at the station, the officer’s supervisor “also noted the strong odor of marijuana.” Based on their “significant training and experience” in identifying this odor, and without getting a search warrant, they opened the package. Oddly, they did so only after “the narcotics unit declined to investigate,” although you’d think they also had the olfactory training.

A few days later, Robey made another poor decision, namely to go back to FedEx and ask why his package hadn’t been delivered. (They hadn’t picked him up yet because he had used a false name.) Arrest followed.

The trial court held that the search was okay under the “exigent circumstances” exception, on the basis of a case that expanded this from automobiles to packages given to a common carrier for shipment. Even if that case is still valid, the Court of Appeal held, it still requires a warrant if the circumstances aren’t actually exigent. Here, “[t]here was no risk the package would leave the station” on its own, and the officers had time to seek a warrant. (The narcotics unit’s refusal to get involved wasn’t explained – maybe it had better things to do?)

Prosecutors were ready for that, though, and contended that “even without exigent circumstances, the warrantless search was permissible under a ‘plain smell’ theory.” Pointing to the “plain view” exception to the warrant requirement, they argued that there’s no difference between seeing and smelling. But the California Supreme Court has held otherwise, noting that approving a search just because evidence may have been “in plain smell” would “open the door to snooping and rummaging through personal effects.” The court ruled that in Robey’s case it was bound by this decision, but it seems to have been okay with that. “The warrant requirement is not an empty formality,” it wrote, but rather the “cornerstone” of Fourth Amendment rights. Some people might call that view “quaint,” but it prevailed here for once.

Also, it turned out that Robey’s return to FedEx actually worked in his favor to some extent. Prosecutors claimed by using a false identity, he had abandoned any expectation of privacy in the package, which I think makes no sense at all, and it didn’t work. The court pointed out that not only did Robey get a tracking number for his pot package, he even went back to ask about it, “objectively demonstrating his continuing interest in it.”

UPDATE: In 2013, the California Supreme Court affirmed and reversed in part. It agreed with the Court of Appeal that “although a container’s mobility may constitute exigent circumstances sufficient to justify a warrantless seizure, it cannot alone justify a search of the container once it has been seized.” But the Court didn’t get to the “plain smell” argument, because it held the state had waived that argument by not making it in the trial court. At least as of 2013, therefore, California law remained unclear on the “plain smell” doctrine.

“Too Drunk to Remember” Excuse Deployed by Federal Judge