A court in London has issued an injunction against the Moshi Monsters website and its parent company, Mind Candy, which prevents defendants from releasing a single purporting to be performed by Lady Goo Goo, a cartoon character that some seem to believe is a parody of Lady Gaga.

For those of you who thought "Lady Gaga" was herself a cartoon character, she is in fact an actual human being.

According to the report, the website caters to kids ages 6-12. Lady Goo Goo is (or was) a blonde toddler in a baby bonnet, diaper, and dark sunglasses, which might actually be an outfit that Gaga has worn. (If not, it's one of the few she hasn't.) I didn't find any pictures of her in a diaper, at least, during a very brief Google search that I would not recommend you repeat. 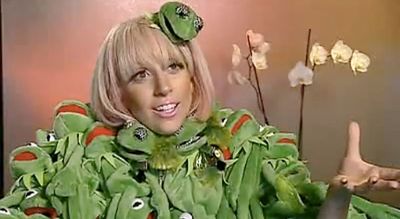 Not a cartoon character

The single, called "The Moshi Dance," was released on YouTube but has apparently been pulled as a result of the injunction, although the Hollywood Reporter's law blog (linked above) has a clip of something that may be it. I take no responsibility for your brain sliding out one or both ears should you choose to listen to it.

Mind Candy's founder, Michael Acton Smith, lamented the ruling, which he said set a "dangerous precedent" for tribute bands and parody songs in general. "The shame is that millions of kids fell in love with Lady Goo Goo's debut single on YouTube and now won't be able to enjoy her musical exploits," Mind Candy's publicist said out of Smith's mouth. "[W]e would have thought that Lady Gaga could have seen the humor behind this parody." Based on the clip, this was not much of a parody, but it does seem like it would have been protected under US trademark law.

Despite costumes like the one pictured, the likelihood of confusion seems pretty low.