Readers who are also aspiring bank robbers please take note: although it may seem like a clever idea to stay near the bank afterward on the theory that it'll be the last thing they expect, the police have actually thought of this. And while I will award you bonus style points for sitting down and calmly having lunch in the meantime, said bonus points have little if any value in prison.

The latest example of this strategy took place on Saturday, when Henry Elmer reportedly visited a Wells Fargo bank in Yuma, Arizona. The 56-year-old, two-first-named former Oklahoman allegedly then pulled a knife, demanded and got an undisclosed amount of cash, and left. Elmer fled, if you can call it that, to the Village Inn Pizza Parlor, which is basically right next door to the bank: 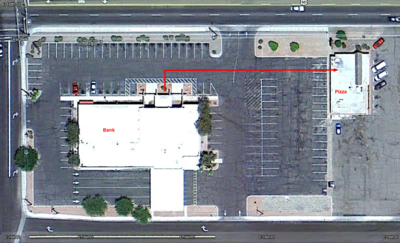 Employees at the pizza parlor noticed that their new customer looked "agitated," but were not otherwise suspicious. He ordered a beer and some pizza, and then had a seat in the back of the dining room. According to an employee, "As he sat down a cop walked in and saw the guy. Then the cop asked me if the guy had been here that long, and I told him 10 minutes tops…. That's when the rest of the cops came in."

You may be thinking, that's a pretty good response time. It is, but on the other hand the cops did not have too far to travel, since the Yuma police station is basically also right next door to the bank:

This is why Elmer did not get any pizza, although he did just have time to guzzle a beer.

Elmer's apparent plan was similar to, but much less entertaining than, a plan that Lee Harris carried out in 2003 in San Francisco (in fact just down the street from our firm's office at the time).

Harris allegedly visited a Citibank branch on Market Street to ask about opening a bank account. He returned about an hour later with a gun and an empty bag, suggesting he had been paying no attention at all during the earlier conversation, and fired a shot into the ceiling. He ordered the teller to fill his bag with money, and then departed. But as he was leaving, he paused, turned back and shouted, "I'm the silver wolf! God bless."

The bonus points awarded for something like that might actually have some value in prison. Hard to say.

Anyway, the Silver Wolf was not finished by any means. He, too, visited a nearby restaurant for lunch, although he did at least put two or three blocks between him and the bank. Employees at Le Central Bistro, obviously a French restaurant, took note of him entering because he was wearing desert camouflage fatigues and carrying a bulging duffel bag. (Dress is typically casual in San Francisco, but not that casual.)

Harris ordered smoked salmon and a glass of red wine – again coming under suspicion – and then went to the bathroom. He emerged wearing a black turtleneck, black sunglasses and a woman's black hat. I actually am not sure whether this would draw any attention in San Francisco, but it didn't matter because employees had already called 911. In addition to the unusual wine pairing, there was apparently lots of police activity in the area, and so that plus the costume changes seems to have triggered the call.

The Silver Wolf did manage to get through half his meal. God bless!

Arizona Considering Bill That Would Punish “Dissent” in Public Schools

Proposed Law Would Make It Illegal to Hoot After 11 P.M.