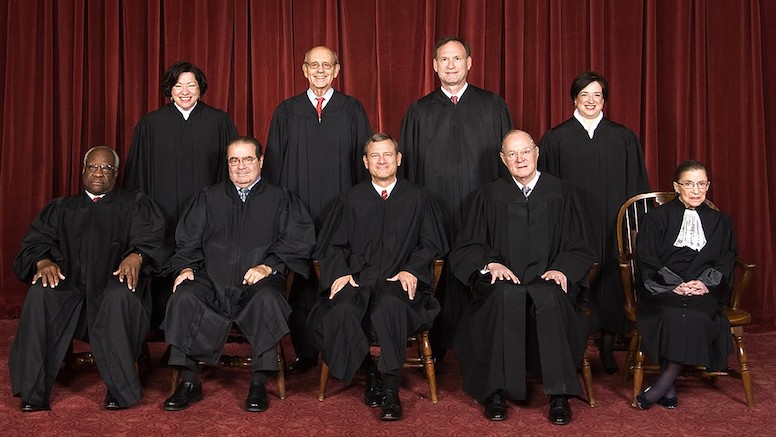 Do at least five of these people seem to hate you?

Here’s one way: a justice asks you whether you have considered “just confessing error in this case.”

Another piece of advice: once the number of justices who have told you to drop a particular argument reaches five, you might as well drop it.

In his SCOTUSblog summary of Tuesday’s argument in Smith v. Cain, entitled “Disaster at the Lectern,” Lyle Denniston describes the ordeal of the assistant DA who apparently drew the short straw and so had to argue the case on behalf of Orleans Parish, Louisiana. The DA’s office there has repeatedly been criticized for how it handles prosecutions. In this case, and in a similar one the Court heard last year, the issue was the apparent inability to comprehend (or the ability to ignore) the Brady v. Maryland requirement that the prosecution turn over evidence that may be material to the defense.

In Smith v. Cain, Smith was convicted of murder based solely on the testimony of one eyewitness, despite the fact that the witness had told the police several times that he couldn’t ID any of the perpetrators. Or, at least, that fact would absolutely have been material to the defense, and so under Brady it has to be turned over.

Now, there are two ways to go here. One is to argue that, yes, this should have been turned over, but the error was harmless in this case because there was no reasonable probability of a different outcome. The other is to refuse to concede that the evidence was even “material” to the defense to begin with, and that’s what the DA decided to do, sticking with this position to the bitter end.

And here’s how that went, edited to show representative statements by each justice but roughly in order. Ask yourself at what point you would have dropped the materiality argument:

JUSTICE GINSBURG: How could it not be material? Here is the only eyewitness, and we have inconsistent statements. Are you really urging that the prior statements were immaterial? … I find that is — is not plausible.

CHIEF JUSTICE ROBERTS: [I]f you were the defense lawyer you really would like to have that statement where he said: I couldn’t identify them.

JUSTICE SCALIA: And not only the only eyewitness but if I understand it correctly the only evidence against the defendant.

JUSTICE KENNEDY: I just have to agree with Justice Ginsburg….I just can’t believe that…. And you say that’s immaterial. I find that just incredible. … You’re transposing two very different things [materiality and the “reasonable probability” standard]. And so that’s incorrect.

JUSTICE BREYER: Is it that you mean immaterial, or … that it wasn’t prejudicial ….? [She seems to say the latter.] Okay. So we can forget the word “material.” …. [T]his seems really odd, I mean really unusual that in … Louisiana they have some kind of system that doesn’t turn that statement over to the defense.

JUSTICE ALITO: Could you explain how this — how this [failing to turn over inconsistent statements by the sole witness] took place?

JUSTICE SOTOMAYOR: Tell me why they didn’t on their face constitute Brady materials that needed to be turned over.

So at this point seven justices have criticized your position, and one of the two who hasn’t spoken is Thomas, who’s not going to. But maybe Justice Kagan will save the day?

JUSTICE KAGAN: Ms. Andrieu, did your office ever consider just confessing error in this case?

MS. ANDRIEU: Your Honor, we believe that we have an — an argument that these statements … are not material.

JUSTICE SCALIA: [M]ay I suggest that you stop fighting as to whether it should be turned over? Of course it should have been turned over. … Why don’t you give that up?

I’m guessing that most of you, if making the materiality argument at all, would have thrown in the towel by the time Kennedy called it “incredible.” But Orleans Parish seems pretty committed to not understanding Brady, as this exchange at the end suggests:

JUSTICE SOTOMAYOR: [There have] been serious accusations against the practices of your office …. It is somewhat disconcerting that your office is still answering equivocally on [such] a basic obligation as one that requires you to have turned these materials over, whether it caused harm or not.

MS. ANDRIEU: [I]t should have been turned over. I guess what I was addressing or attempting to address was the materiality prong of Brady.

Counsel, your time is up.

Update on the “Buxom Woman” Dispute