The New York Times reports that a man is suing the studio he hired to take wedding pictures because he was disappointed with the results. Nothing too unusual about that, by itself; the guy paid $3,500 for a service he says he wasn't happy with. But he is also demanding that the studio pay the cost of the entire wedding ($48,000), and according to the Times this is so that he can "have the wedding recreated exactly as it was" so that the pictures can be retaken to his satisfaction.

That may be difficult, the report points out, since the wedding was in 2003, the couple is now divorced, and even assuming she would be interested in "recreating" this wedding her whereabouts are currently unknown.

In an opinion issued in January, a judge dismissed all but two of the eight causes of action plaintiff alleged. That included the claims for negligent and intentional infliction of emotional distress, which failed because such damages are only available to someone harmed by conduct that is "extreme," "outrageous," "atrocious," and utterly intolerable," not to a guy who now thinks he was lighted poorly in his wedding pics eight years ago. (He also claims he was "yelled at" after complaining about the pictures in 2003, but still.) The judge let a fraud claim go forward but noted that this is likely just a breach-of-contract case worth the original contract price at most. 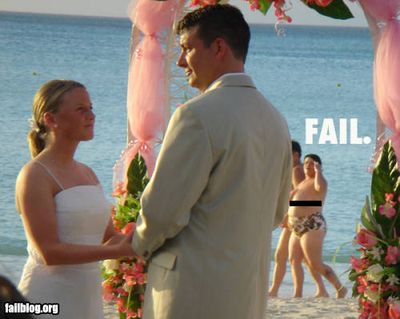 The opinion doesn't mention a demand to recreate the wedding as opposed to just recovering its cost (a ridiculous demand anyway), but according to the Times the plaintiff testified in his deposition that "I need to have the wedding recreated exactly as it was" so that, among other things, they could get pictures of the dance and bouquet toss, which he says they missed. Since he doesn't know where she is, apparently, it is not likely that either of those events could be "recreated exactly as it was." (The Times says that "the bride is believed to have moved back to her native Latvia.")

The studio's owner "chuckles" at that idea, but finds the cost of defending the lawsuit (now about $50,000) less comical. In what is probably a complete coincidence, the plaintiff's lawyer works for a big firm in which the plaintiff's dad is a partner, but plaintiff testified he is paying his lawyer himself. The report didn't say whether this is a contingent-fee case.

Karma Chameleon Will Do Community Service With NY Sanitation Department