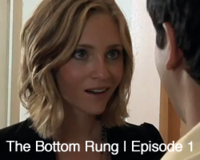 Those of you who have ever slogged or are currently slogging through a document-review project, which I suppose includes most lawyers on Earth, may want to check out a new web series on Bitter Lawyer called "The Bottom Rung." The first episode was posted today.

The series was created by Matt Ritter, a 2005 University of Pennsylvania grad who enjoyed big-firm "life" for a while before fleeing to comedy. (You can see Matt's left ear and part of his neck in this picture, which for obvious reasons features co-star/producer Jess Garvey instead. But his whole face does appear a number of times in the actual episode.) The style is reminiscent of "The Office," as is the fact that none of the characters are exactly at the apex of their professional lives.

Or maybe they are. One of the series' main characters, played by Eddie Pepitone, has apparently been doing doc review for many years and is really enjoying life at this point. Or as Matt describes it, "[h]is character likes nothing more than to remind the dreamers that they cannot escape document review and that they will die down there." That character is not really in the first episode but clearly has great potential.

And then get back to work. Those documents ain't gonna review themselves.

No Repeat for Obama on Nobel Prize