After my post the other day noting the apparent death of freedom, someone wrote me to say that if I looked at Senate Amendment 1456, I would see that I was wrong to be concerned. I was wrong once in the 1990s, and I can't say I enjoyed finding that out, but I went to go look at this anyway.

I don't think I was wrong this time.

I also decided, though, that the full explanation was not amusing enough to post here, and in fact would have been kind of depressing had I not given up hope long ago. So if you want to learn more about your former freedom and the role of the mysterious Senate Amendment 1456, you must go read my post, "You Say 'Indefinite Military Detention of Citizens' Like It's a Bad Thing," over at Forbes.com.

What seems more appropriate to post here is something else I noticed, I think on the same day, namely an apparent visit from someone in Romania (or using the Romanian version of Google, anyway) who had Googled for advice on whether lap-dancing is legal: 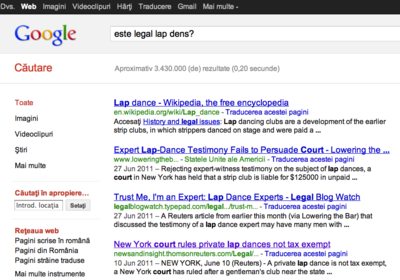 I am inexplicably proud of the fact that in the search result on this topic, at least as translated into Romanian, Lowering the Bar was second only to Wikipedia. And take that, Legal Blog Watch, which came in third.

And now that I've managed to work "indefinite military detention" and "lap-dancing" into the same post, I might as well call it a day.