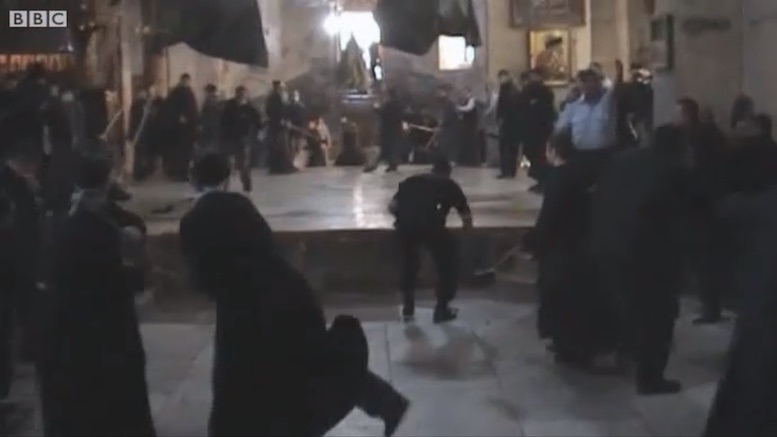 Broomstick-hurling at a holy place (image: still from a BBC video clip)

Here we go again. This time, it’s Orthodox v. Armenian priests in a cage match at the Church of the Nativity.

According to multiple sources (I’m citing the BBC because the British narrator makes the clip seem even more like a Monty Python sketch), this fight broke out Wednesday morning while the two groups of Christians were cleaning the Church of the Nativity in Bethlehem, traditionally held to be the birthplace of Jesus. The church is cleaned between the Christmas celebrations on December 25 (Catholic, Orthodox, etc.) and those during the first week of January (the Armenians and others still on the Julian calendar). It’s not entirely clear what started the brawl, but one report said it was believed that “a clergyman of one order … accidentally pushed his broom into space ‘controlled’ by the other group.” That makes sense, because that’s just the kind of border aggression that can spark a full-on monkfight.

As I wrote in 2009 when these same two groups went at it in the Church of the Holy Sepulchre, tensions are always high in super-holy places like this because each Christian denomination claims jurisdiction over the whole thing, and they don’t like sharing. They do share, under arrangements that go back hundreds of years and give each group control over a particular zone, but they don’t like it one bit. And they guard their jurisdiction so jealously that no group will allow any other group even to walk unsupervised through its zone for fear of weakening its claim to exclusivity, and this has often led to conflict.

So it’s not surprising that an unauthorized broom incursion (“accidental” or not) could spark violence. And you really should watch the clip, not only to witness the spectacle of priests and monks beating the crap out of each other with broomsticks over who owns the birthplace of the Prince of Peace, but also to see the monk recording the whole thing with his smartphone. 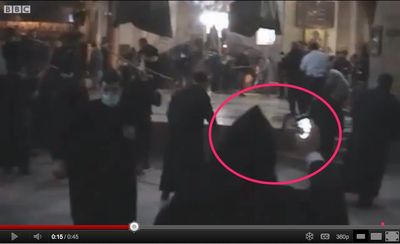 I guess that shouldn’t have surprised me either, but it did.

According to one report, “Brooms, fists and vicious insults flew in all directions” between the 100 or so holy men involved in the rumble, but no one seems to have been seriously injured, and no arrests were made this time around. So, not that big a deal, as religious warfare goes. “It was a trivial problem,” said Police Lt. Col. Khaled al-Tamimi, the kind that “occurs every year.”

In what may be the most ironic part of all, the fight between the two Christian groups was broken up by Palestinian police, most if not all of whom, presumably, are Muslim. I don’t know that for sure, but Bethlehem is controlled by the Palestinian Authority, and I’m guessing that when the monks need police, they don’t especially care whether the cops are Muslim or Christian and aren’t checking ID. (Nor do I have a reason to think Muslims are not allowed into the place—as I learned in 2009, two Muslim families have had responsibility for the front door of the Church of the Holy Sepulchre for the last eight hundred years or so, and that still seems to be going okay.) Anyway, I’m going to believe that unless shown otherwise, because that would mean this story involved Muslim cops having to keep the peace between two groups of Christians trying to kill each other due to religious fanaticism. Seems to help put things in perspective.