This happened last year, but there’s no limitations period on totem-pole stories as far as I’m concerned.

In August 2010, the Rotary Club of West Seattle celebrated the return of a beloved totem pole to Rotary Viewpoint Park. Luckily, this story gets more interesting than that sentence suggests, mainly because of where the totem pole had been and how it got there.

The pole left the park in November 2009, when a city art commissioner hired a crane company to remove the 18-foot, 500-pound pole and haul it away for restoration. They loaded it onto a truck, but that truck got stuck in the mud and a tow truck had to be called. The tow-truck owner called police to direct traffic while he freed the other truck. And so off the totem pole went, with the help of the crane-company owner, the tow-truck owner and several police officers, none of whom bothered to check whether the “art commissioner” actually had permission to take the thing in the first place.

A few days later, a Rotarian who happened to be driving by saw this: 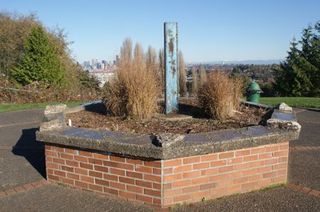 No, said the Parks Department, we’re not working on any totem poles, why do you ask?

Local residents who saw the operation helped police identify the truck companies. The crane company’s owner was able to convince police he was innocent even though he had helped with the theft, a story the police were probably more willing to buy because they had helped, too. He identified his customer, but that man denied any involvement. Feel free to check out my property, he told police.

According to the police report, an officer who visited the property “did not see any sign of a totem pole.” But unfortunately for the suspect, he had violated the first rule of Totem Pole Stealing Club. “[A neighbor] told me,” the officer wrote, “that [the suspect] has been talking about getting a totem pole for his property for several months.” Police were then able to locate some contractors who said they had helped the man move a totem pole into his garage, and that was enough for a warrant. Eventually, the man confessed to taking the pole and said they could find it “at a Senior Center in Oregon, on a boat trailer.”

Oregon police found the stolen totem pole at that location. In fact, they found two: 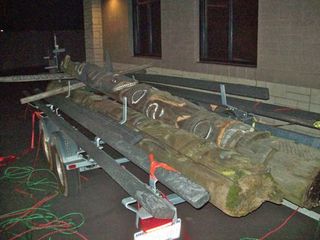 We got ourselves a serial pole stealer

It turned out that the suspect, 69-year-old Charles Jenks, had been dreaming of getting a totem pole for a new home he was building. (He apparently was going to put it inside a two-story stairwell, not just stick it in the lawn where everybody could see it. Because that would be crazy.) I guess these aren’t available on eBay, so he decided to steal one in broad daylight. Why he stole two—the second one from outside a grocery store in Oregon—was never explained.

The Rotary Club decided not to press charges after Jenks agreed to pay almost $21,000 in restitution. There has been some controversy as to why Jenks was allowed to avoid prosecution for stealing just because he could afford to pay the costs. I’m speculating here, but maybe the city of Seattle did not want to dredge up its own sordid history of totem-pole theft.

In 1899, some “leading Seattle citizens” visiting Alaska came back with a very fine totem pole, which they set up in Pioneer Square. There were conflicting stories as to how they came by this item. According to one of the leading citizens, the Indians were happy to get rid of it:

Arriving at the point designated, we found an abandoned Indian village with probably 100 or more totem poles . . . . [T]here were two decrepit Indians which [sic] we finally succeeded in interviewing, who made no objection to our taking the pole to Seattle. In fact, the Indians were as pleased at our taking it as were the people of Seattle to receive this outstanding example of workmanship of the Northern Indians.

On the other hand, the ship’s third mate testified that

the Indians were all away fishing, except for one who stayed in his house and looked scared to death. We picked out the best looking totem pole. . . . I took a couple of sailors ashore and we chopped it down—just like you’d chop down a tree.

This was also the Indians’ version. A grand jury in Alaska later indicted some of the Seattle citizens, but those charges too were dropped. A Seattle newspaper eventually paid the tribe $500 for the totem pole, which stood in Pioneer Square until 1938.

I don’t know where that one is now, but I have an idea where to start looking.

Professor Will Fight for Freedom of Fecal Expression