It appears that the Freetail Brewing Company, a brewpub in San Antonio, recently got a nastygram from lawyers for a company in some other state demanding that it cease and desist from using the mark "HOPASAURUS REX" in connection with one of its beers. In response, the company said it did not think the complainer's Lanham Act claim was likely to succeed, since even if the marks were identical, consumers in other states were highly unlikely to be confused by the use of that term in a Texas brewpub (which, so far as I could tell, only sells its beer on the premises). Freetail said it did not use the mark enough to make it worth fighting over, though, and so would comply with the demand.

But I think Freetail wins anyway, because its letter is pretty good.

For example, Freetail (through its owner, Scott Metzger) clarified that it did not even use the mark for a beer, but rather to refer to a step in the brewing process. Metzger continued:

Normally I would tell you what this process is, but I really don't feel like it anymore since your first introduction to me wasn't very nice. Furthermore, I don't want you to try to trademark it and sue me later.

In any event, we don't use HOPASAURUS REX enough to care about what we call it, so you may consider this letter to be our complete and total acquiescence …. When you are informing your client of such, I request (but not demand) that you please tell them they could have just asked us nicely and saved the legal fee. I also request (but not demand) you please tell them that I will not be giving them a hug if I ever meet them, but I'd love to try their beer … and I would still give them a high five.

The letter concluded with this depiction of HOPASAURUS REX surrendering: 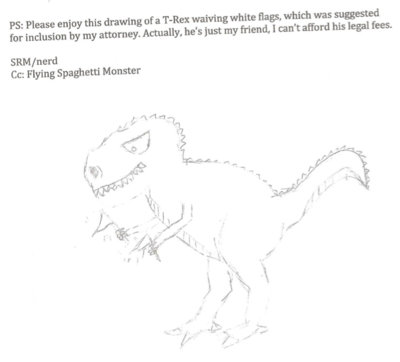 The cc: to the Flying Spaghetti Monster is another nice touch.

According to Freetail's website, the company is named after the Mexican Free-tailed Bat, of which many millions currently reside in the San Antonio area. A press release also posted on the site took advantage of a 2009 incident in which San Antonio Spurs player Manu Ginobili killed a bat that had flown into the AT&T Center during a game. (Ginobili insisted the bat had survived, but I'm not sure that was ever confirmed.) In the release, Freetail announced that it was "willing to broker a peace accord" between Ginobili and area bats, which might, it suggested, include a donation from the bat-killer to Bat Conservation International, which owns a cave with 20 million bats in it. No evidence that Ginobili took it up on that offer, but it would have been a nice gesture.

Regardless of your attitude toward bats, based on these items and the website it seems like the Freetail Brewing Company would be a fun place to work and/or have a drink, even if HOPASAURUS REX is no longer to be seen there. Seems safe to say it's more fun than working at the [REDACTED] law firm, that's for sure.