Believe it or not, the plaintiff who filed this is complaining about somebody else’s grammar: 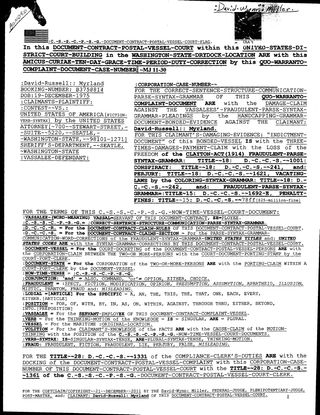 This was filed by one of those people subscribing to the “sovereign citizen” nonsense, which involves a variety of legal arguments that have failed repeatedly over the years, if “failed” is the right word to apply to arguments that are pretty much incomprehensible. See also “Florida Couple Secedes,” Lowering the Bar (Oct. 15, 2008). In this variant of the nonsense, words only have legal meaning if rendered in exactly the correct way, including the “correct” grammar, syntax, and even punctuation, according to a series of bizarre rules that, surprisingly, only the proponents appear to know. (See the full complaint for examples.) Since the government’s not doing it right, they argue, the charges against them (often tax fraud) must be dismissed.

In this complaint, David-Russell:: Myrland (as he writes it), who is currently serving three years for threatening public officials, charges prosecutors and DHS officials with (among many other things) “backwards-correct-syntaxing-modification fraud,” whatever that might be. To be fair, he also charges them with “babbling-collusion-threats” and “grammar-second-grade-writing-level-fraud,” and I might be willing to agree that DHS does those things if only Myrland had hyphenated correctly. As it stands, though, there’s nothing I can do. Which is a relief, because now I don’t have to read the rest of his complaint.

Via Language Log, TPM, and the excellent “Headline of the Day” email (to which you can subscribe here) by Tom Harrison of Lawyers Weekly.

Prosecutors Taking a Second Look at the Red Bull Defense