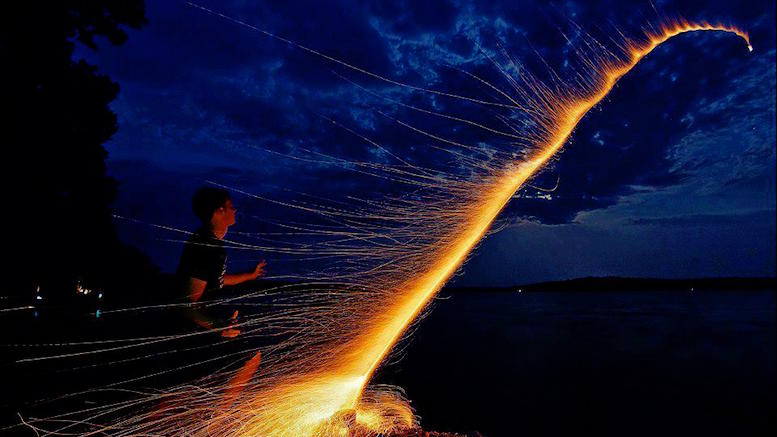 I was in a hurry to get the bottle-rocket lawsuit posted the other day, so I only added a couple of comments, not that it really needed to be embellished. But it’s the kind of case that tends to linger in your mind—whether you want it to or not—and here are a few additional thoughts.

First, the complaint clearly — and repeatedly — alleges that the defendant fired the rocket in question “out of his anus.” Whether that’s literally what happened is not clear. Certainly, it would not be impossible to insert a bottle rocket into one’s anus at least to some extent, maybe even to the depth necessary to facilitate a launch. But whether it’s likely that anybody would really do that, even at a fraternity, is difficult to say.

There may be another explanation. As recounted by this Minneapolis blog, which included the photographic evidence below, there has been at least one successful bottle-rocket launch from the buttocks area that did not involve a direct insertion of the support structure. 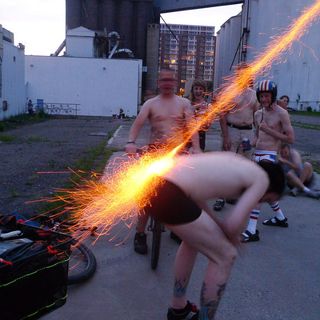 Given the clear and dramatic success of the Minneapolis launch, this may be what was attempted in West Virginia, but of course the complaint alleges otherwise.

Second, although there is only one individual defendant so far, it’s unlikely he acted alone. Again, while the defendant might possibly have accomplished the insertion and achieved launch position on his own, it seems doubtful he could have ignited the rocket from that position. Again, the Minneapolis incident supports this hypothesis (right). So I would not be surprised to see one or more additional defendants added, or at least some unindicted co-conspirators.

Finally, another issue relevant to a finding of duty would be whether the harm was foreseeable, but I would say the answer here is likely yes. The relevance of the famous Palsgraf case, of course, is obvious.

In Palsgraf, a woman was injured on a railroad platform after guards tried to help two Italians onto a moving train. One of the Italians dropped a newspaper-wrapped package that turned out to contain fireworks, which exploded, knocking over some scales ten feet away that hit Mrs. Palsgraf. She sued the railroad, alleging the guards had been negligent, and won. But on appeal, the court reversed, saying that on those facts the guards could not have foreseen the harm to Mrs. Palsgraf and so the railroad could not be liable for a breach of a duty to her.

So, this case is kind of like Palsgraf, if the Italians had rockets sticking out of their butts.

The case against the fraternity, at least. In Palsgraf, the Italians disappeared after the incident (so I guess they were alleged Italians), whereas here the firework-bearer is also a defendant. Otherwise, the cases are similar in that they involved (1) fireworks and (2) harm that arguably was difficult to foresee. As Justice Cardozo wrote in Palsgraf, “[t]he risk reasonably to be perceived defines the duty to be obeyed.”

This does not mean, of course, that one who launches a destructive force is always relieved of liability if the force, though known to be destructive, pursues an unexpected path…. [But here] there was nothing in the situation to suggest to the most cautious mind that the parcel wrapped in newspaper would spread wreckage through the station…. If the harm was not willful, [a plaintiff] must show that the act as to him had possibilities of danger so many and apparent as to entitle him to be protected against the doing of it though the harm was unintended.

That is, the court held that the guards could not have foreseen when they acted that Mrs. Palsgraf would be injured in the way she was. Would the outcome have been different if the case had involved clearly visible butt-mounted fireworks, or if the Italians had been defendants? Maybe, though there is still the question whether it’s foreseeable that fireworks would knock over scales ten feet away. Here, though, instead of being hit by scales, the plaintiff basically just claims he was startled by an explosion and fell because of a missing railing. Despite the weird facts, that harm seems foreseeable enough that the case against both defendants would likely get to a jury.

Of course, these particular weird facts would seem to make a settlement likely, but only time will tell.

UPDATE: The case did in fact settle, as the West Virginia Record reported in December 2013.

The Case of the Dangerous Dachshund