In case you missed it, the Attorney General of the United States spent a little time yesterday discussing the circumstances under which the President could order your death without having a trial or even having charged you with any crime.

I just wrote that sentence myself, and I still keep re-reading it, thinking “that can’t be true.”

I wrote this up in more detail yesterday over at Forbes, where as you may have noticed I tend to post (or initially post) things masquerading as more serious items. “Attorney General Explains Why It’s Okay to Kill U.S. Citizens Without a Trial,” Forbes.com (Mar. 5, 2012); see also “You Say ‘Indefinite Military Detention of Citizens Like It’s a Bad Thing,” Forbes.com (Dec. 7, 2011). I do think there are some decent lines in yesterday’s post, although maybe not as good as Jonathan Turley’s crack about the same speech: “The good news is that Holder promised not to hunt citizens for sport.”

I think that’s a pretty good summary. The lowlights of the speech, I think, were Holder’s promise that no citizen would be blown up unless the government had determined (among other things) “that the individual poses an imminent threat of violent attack against the United States,” and his somewhat unusual definition of “due process.”

First, it turns out that “imminent” doesn’t mean what you think it means (or what the dictionary thinks it means). Rather, the concept “incorporates considerations of the relevant window of opportunity to act, the possible harm that missing the window would cause to civilians, and the likelihood of heading off future disastrous attacks against the United States.” If you see anything in there that has to do with being “imminent,” please let me know. The “future” is a big place, and just because something might be in it does not make that thing “imminent.” 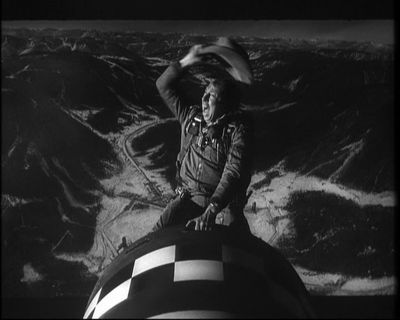 Not quite on point, but a great picture anyway

Second, Holder did promise that nobody would be killed without “due process.” Comforting! But no! Because this also doesn’t mean what you think it means. “‘Due process’ and ‘judicial process’ are not one and the same,” Holder said, “particularly when it comes to national security. The Constitution guarantees due process, not judicial process.” Oh. So what process are we due? Executive process. But have no fear, you won’t be put on a death list without a “thorough and careful review” of the (secret) evidence against you by the Executive Branch, Holder basically promised. So there’s really no need to get those other branches involved. Let’s just keep this between us.