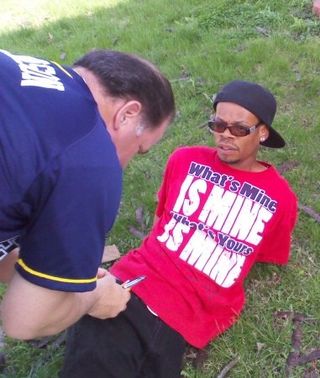 There are at least two problems here.

First, the bright red color is likely to make you highly visible, which is good if you’re trying to cross the street safely but not so good if you’re crawling through somebody’s window in broad daylight. Second, the message on the shirt is going to be problematic. It makes you more identifiable and is potentially incriminating.

Would this be admissible in court? Maybe. I don’t think it’s hearsay, because it wouldn’t be offered for the truth of the matter asserted, unless you could recharacterize the message “What’s Mine Is Mine, What’s Yours Is Mine” as the message “I AM A BURGLAR.” Even then, it’d be a “party admission” and so not hearsay, but interpreted that way it might violate his right against self-incrimination. It might theoretically be relevant to proving intent to burgle, but on that issue its probative value might be outweighed by the risk of undue prejudice — the jury might convict him for wearing the stupid shirt rather than on the burglary evidence. But assuming a witness saw the shirt during the crime, then it would also tend to prove this was the same guy, and so I’d think it would be admissible on that basis. And then the message wouldn’t really be offered as “testimony,” thus avoiding the Sixth Amendment problem.

All very interesting (you may or may not be saying), but I doubt the prosecutor is worrying about the T-shirt evidence too much anyway, given that the suspect was reportedly caught with the victim’s wallet and several other items bearing the victim’s name. If what’s yours is actually his, what’s his will turn out to be pretty solid evidence.