As I mentioned earlier, somebody sued Apple earlier this month claiming that the electronic assistant "Siri" who lurks in each iPhone 4S does not work as advertised. Two weeks later – but only a day or two after the first lawsuit was reported – two other guys made basically the same claims in the same court:

At least this is more than just a cut-and-paste job based on the first lawsuit. That does sometimes happen as people rush to jump on the bandwagon; I've seen complaints where the prior plaintiff's name still appears in the complaint, because the lawyers just changed the names in the caption and didn't bother to proofread the thing before filing it. (Oops!) This is not one of those cases, but the allegations are basically the same as in Fazio. 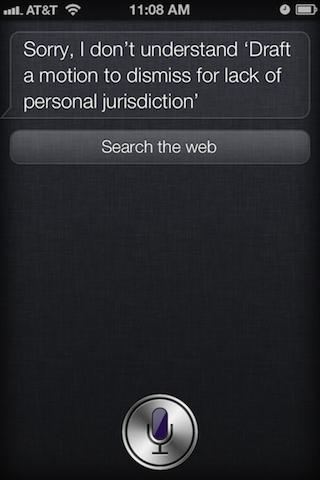 It's not impossible that this is entirely coincidental. Like Frank Fazio, Balassone and Swartzman may also have bought their phones based on Apple's alleged representations that Siri can do anything you ask her, "promptly realized" after the purchase that this is not in fact true, taken some time to investigate the matter and locate an attorney willing to assist them and all others similarly situated, and just happened to file about the same time that news broke of the first lawsuit. Could have happened.

Or their lawyers may have seen the news and recruited the first couple of yokels who came walking by their office. (In Silicon Valley, even the yokels have the latest iPhone.) Only time will tell.

I did read the complaint and asked Siri all the questions that Balassone and Swartzmen allege she screwed up for them, except for the questions involving their personal data, of course. She answered them all correctly for me, but maybe she just likes me better.

Hooray for Jack Daniels (and Its Lawyers)

Scanners Successfully Locate Things for TSA to Steal, Not Much Else

Marital Spat Escalates to Use of Napalm