A few days ago these jokers climbed up on the Colosseum to protest the fines they got for bothering tourists. As you can see, they are sort of dressed like Roman legionaries or gladiators, except for the blue jeans, and it looks like the fat one is also wearing the Santa suit from what I assume is his full-time job. 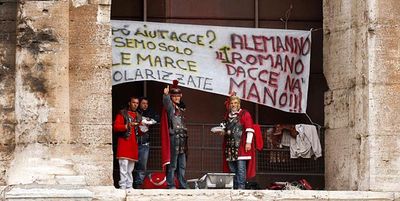 We who are about to complain salute you

The fake gladiators hang around the Colosseum and other tourist sites and pose for pictures, which tourists often take without realizing that these guys expect to be paid. This is basically the Roman equivalent of the "superheroes" who hang out on Hollywood Boulevard and get into similar kinds of trouble. See, e.g., "Spider-Man Arrested for Battery," (May 11, 2010) and "Nobody Tells This Wookie What to Do" (Feb. 6, 2007); but see "Quit Bothering Superman, Judge Tells LAPD" (Nov. 22, 2010). It can lead to some ugly scenes, and police periodically crack down on the practice. This protest followed such a crackdown last weekend.

The mayor of Rome said he would continue to enforce the rules requiring the phony fighters to get permits and behave themselves. "We will not let ourselves be blackmailed," said Gianni Alemmano. "Either the centurions accept the rules or they will have to go."

No, I was kidding – I'm not really Spartacus.

It's not a new problem. Last August, the BBC reported that 20 "gladiator impersonators" had been arrested after an investigation into an alleged scheme to corner the market on gladiator impersonation. The men, apparently members of various gangs, had divided up tourist sites in Rome (including the Colosseum) among themselves and were said to be "defending their territory with violence." Police learned about the scheme, the BBC said, from "rival gladiators who had been chased away from popular tourist attractions." That is, fake gladiators were getting in real fights at the Colosseum, of all places, over the right to keep pretending to be gladiators. The losers then filed complaints, which is not how it used to work but times have changed.

I'd have given a lot to see all that go down.

Jesse Jackson Jr.’s Off to Jail—So Everything Must Go!