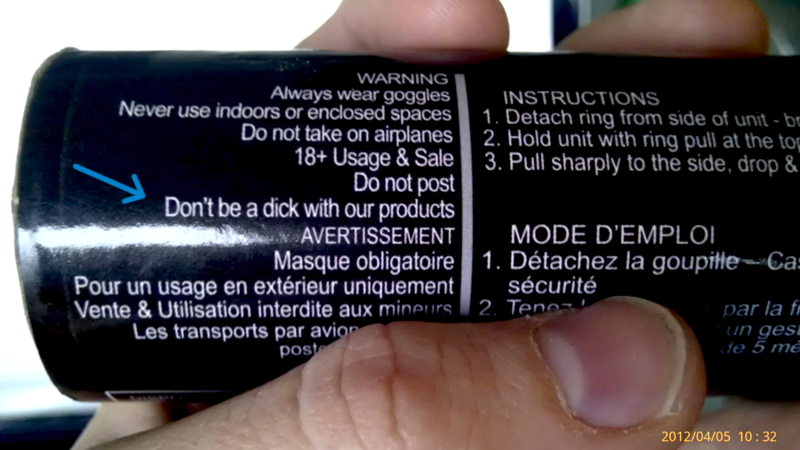 I guess it couldn't hurt. In this case, it appears on a smoke grenade, so it probably is a good idea.

Whether it would work or not is another story. We actually might be able to test that in this particular case if, as it appears, the same warning isn't given in French. (Could someone translate that for me, by the way?) If we could compare the rate of dick-like behavior involving smoke grenades among English-speaking and French-speaking populations, that might give us some insight into the effectiveness of this warning. (I'm looking at you, Quebec.)

I realize that controlling for the effect of other contributing factors would be extremely difficult, but I'd still be willing to chip in if it will help get this study done.

Update: Still investigating the item above, trying to locate the manufacturer. I have a couple of emails out, but if you know who makes this, please advise. As for the proper French translation, if any, for "Don't be a dick with our products," that's also still unclear. I've gotten several suggestions so far, any or all of which may be wildly and/or offensively wrong (offensive to French-speakers, at least):

I'm told that con means something entirely different in Quebec than it might mean elsewhere. The next-to-last one is said to be more "appropriate" in Quebec, but that at least looks like an entirely different language and Google Translate was thoroughly baffled by it (though it is frequently baffled). The last one is Google's suggestion. It apparently thinks bite is the equivalent of what con seems to mean in Quebec, but I can't confirm.

Update II: I'm told by someone who sounds pretty sure about it that Ne faites pas le con avec nos produits is the "proper French translation." Use at your own risk, however.

Richard Dreyfuss Does a Dramatic Reading of the iTunes License Agreement