The gang at Abnormal Use dug up this old comic featuring one of DC Comics' duller superhero characters: 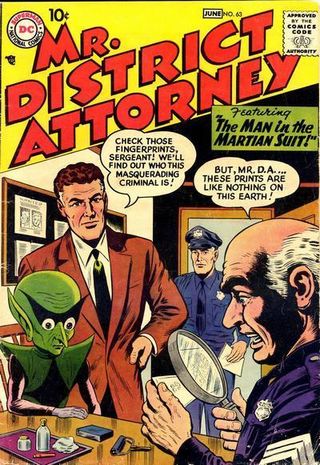 As they point out, this D.A. is apparently dull in more than one way, because he seems to think that the suspect he's collared, who's not really even shaped like a human being, is a tiny "man in a martian suit." Even if that were true, it doesn't seem very likely that he'd have the right guy here, given that criminals tend to be interested in keeping a lower profile than dressing up as a Martian might allow. From the expression on the suspect's face, though, I take it that he's tried to explain all this a couple dozen times already, and at this point is resigned to just sitting around until these geniuses figure it out.

I bet his expression changes when he finds out the Supreme Court recently said okay! to routine strip-searches.

There was a radio and TV drama also called "Mr. District Attorney" (Wikipedia) that ran in one form or another between 1939 and 1952, and then for a while in syndication. The show was half an hour long but this YouTube clip more or less compresses an episode into two minutes and 14 seconds.

There was a movie of the same name in 1947, although it's not clear to me whether it was connected to the series or if either one was connected to the comic. Probably they're all related, although you can't copyright titles, so that doesn't tell us anything. I imagine that once somebody's come up with a title as exciting as "Mr. District Attorney," there's a lot of competition to use it every chance you get. I haven't seen the movie, but the title of one of the reviews on IMDB is "I just frisked your monkey out there and picked myself up a souvenir," and if that's a line from the movie it might be worth renting for that reason alone.

Anyway, the reason this resonated with me in the first place is that it reminded me of the report a while back that the Santa Barbara D.A. had said he was standing by a star witness for the prosecution although his deposition hadn't gone so well. Specifically, the report said defense counsel "focused much of their questioning on his claims that alienlike creatures emerge from his closet and put pinholes into his chest and those of his family members." See "D.A. Sticks With Witness Who Says He Sees Horned Aliens," Lowering the Bar (Oct. 20, 2006). I assume that didn't come up during the prep session? Still hoping to get the actual transcript of that deposition, which I'm sure somebody must have saved.

I want to believe that the truth is out there.

Two Ways to Get the President’s Attention

No Trademark for Chippendales’ “Cuffs & Collar,” Board Rules