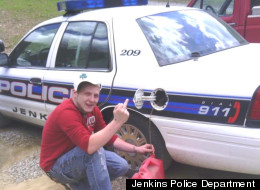 The obscene gesture is within every citizen’s First Amendment rights to deliver, but probably did increase the cops’ motivation to track this particular citizen down.

The man and his girlfriend (who took the picture) then demonstrated they had learned exactly nothing about the risks of self-incrimination by giving an interview to WYMT. The girlfriend did try to plead not guilty, at least at first, by claiming no theft had actually occurred. “Yeah, we’re sorry,” she said, “but it was just a joke. I mean if we was [sic] going to steal gas, we wouldn’t put it nationwide on Facebook. We don’t steal anyway, but we’re sorry.” Then he joined in.

So much for that plan.

“I ain’t gonna lie,” he continued, something that his girlfriend might have appreciated knowing in advance. He got a little, “but not much. I couldn’t get much. I tried, but there wasn’t much in it.” So, you posted a picture of yourself apparently committing a crime, then gave an interview in which you admitted guilt and also added that you’d have stolen even more had there been more to steal. Good work there.

And a few bonus points: “he says he is not sorry for what he what he did.”

Fall Is Here . . . A Great Time to Schedule Surveillance

I’m Sorry, Doctor, But What Did You Say Your Name Was?