And no, that does not seem to be a metaphor:

Two lawyers from the organising committee of the London Olympics have been shadowing the torch on every step of its journey across the UK to prevent ambush marketing on behalf of unlicensed products, an international official has revealed.

"Ambush marketing" is an attempt to take advantage of (in this case) Olympic hype without paying to be an official sponsor. Actual official sponsors like McDonald's have collectively paid over $1 billion for this status, and I guess not surprisingly they and the Olympic Committee want to protect the exclusivity they paid for. But the measures taken in London have been pretty heavy-handed—in fact, Parliament actually criminalized ambush marketing within a designated "event zone." See Brian Pelanda, "The Anti-Competitive Olympic Games," Orange County Lawyer (July 2012). (The London Organizing Committee ["Locog"] actually suggested ticket holders in t-shirts displaying non-official brands would be turned away, but had to back down on that one.)

According to the Guardian, there was also what you might call (and I am calling) a "roving event zone" surrounding the Olympic torch relay as it passed through the UK, escorted and defended not only by security personnel but also by a pair of lawyers:

"Any ambush advertising or infringement outside the event zone will be addressed [said an IOC member]. There are two Locog lawyers running all the way [with the Olympic torch] to make sure that there is no brand ambush or infringement," he said.

Emphasis added. This, of course, is a precedent that goes back thousands of years to the Battle of Marathon; Pheidippides' lawyer insisted on escorting him back to Athens to talk about endorsements. That's why he had to run all the way—the dude was billing him like 500 drachmas an hour. (Actually, you know who came up with the torch relay idea? The Nazis. Uncomfortably true story.)

Now, have I spent a lot of time reviewing pictures from this year's torch relay to see if I could pick out the lawyers? Of course I have, but to no avail. 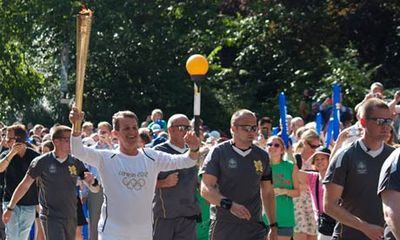 Is there a lawyer in this picture?
(credit: Jaki North/Demotix/Corbis)

I guess it was too much to hope for that they would be jogging alongside in suits and running shoes, although if you want to deter ambush marketing shouldn't the lawyers be on display? Maybe they dressed up like the security team (I'm guessing those are the guys in the mirror shades). It's possible that the guy on the far left might be coordinating the legal defense on his cellphone, but I think it's more likely that the lawyers are following in a vehicle. Hopefully one of those little clown cars. (If anyone has or can find a picture of a lawyer escorting the torch, I would be very grateful.)

The disclosure of the legal escort came during a talk by an IOC official introducing a new exhibition ("Playing by the Rules: Sport and the Law") at the supreme court in Westminster. He also said that the overall legal team for the Games is quite "extensive"—it's not clear whether he gave a number, but the Guardian reported that one "veteran lawyer" asked him why "thousands of lawyers" were required now "when at the 1948 London Olympics all such arrangements had been handled by one man." Maybe that man was him and he's still pissed off about it, but it seems like a fair question anyway.

The exhibition, which of course focuses on the Olympics, is said to deal with legal issues such as equality, diversity, and assumption of risk, as well as the "dangers of commercialization."

Yes, You Could Get a DWI on a Barbie Jeep