The Wall Street Journal reports that MGM Studios is suing to stop the filming of a sequel to Raging Bull, the 1980 movie about boxer Jake LaMotta for which Robert DeNiro won an Oscar. According to MGM, its original deal with LaMotta gives it the right to any sequel, and the one being made now will "irreparably tarnish the value" of MGM's rights and of the original movie.

I don't know about that second argument. I mean, nobody thinks that either The Naked Gun 2 1/2: The Smell of Fear or The Naked Gun 33 1/3: The Final Insult was as good as The Naked Gun, but I don't think you could say they "irreparably tarnished" its value. (Neither did O.J. Simpson's later work, which nobody was really a fan of, either.)

And besides, there's already been a sequel (sort of): 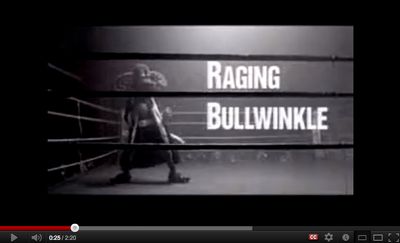 That didn't ruin the first one for me.

Warning: Raging Bullwinkle, which is from the 1994 HBO series Hardcore TV, is not at all safe for work.

Absence of Goats Cited as Reason for Speeding