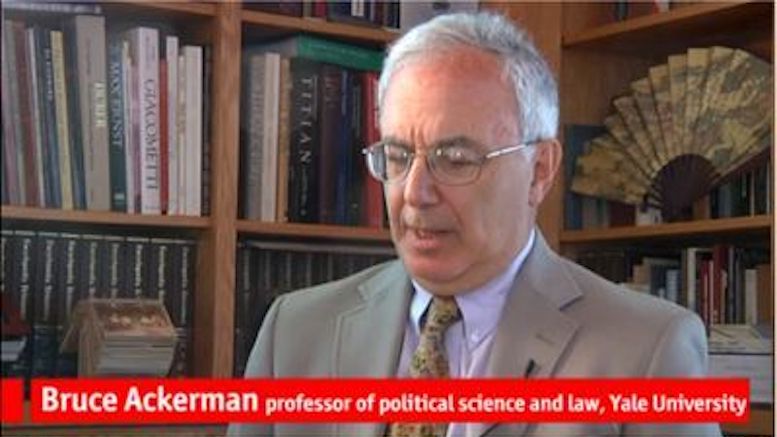 I’m paraphrasing, but I’m pretty sure he’d agree with that.

In this video from the Economist, Prof. Bruce Ackerman makes some important points that make this worth five minutes of your time (depending on your billing rate, I suppose).

First, in the past when presidents have overreached, the opposing party imposed some restrictions when it regained power. That hasn’t happened this time. Instead, “[b]oth Democrats and Republicans are in love with presidential power,” which makes the threat much more serious.

Second, governments (like ours) that say their actions are legal based on a legal analysis they refuse to show us shouldn’t be allowed to pretend they are honoring the rule of law. “At the very least what the rule of law means is that the reasons! be! published!” says Ackerman, tri-exclamationally.

Third, it seems likely that at least part of the reason they don’t want to publish these memos is that the memos just aren’t any good. For example, he notes, when it was finally released John Yoo‘s infamous torture-justification memo turned out to be of “extraordinarily poor quality,” with reasoning that “does not pass the laugh test.” Of course, if you know what your answer’s going to be before you start, and that you can keep your work secret, then why bother doing a good job? I’m surprised the guy bothered to do any proofreading.

As Ackerman mentions, there is said to be another memo that explains why the president has the legal right to drop bombs on U.S. citizens who haven’t been convicted of anything yet, but we don’t get to read it, either. See “For Christmas, Your Government Will Explain Why It’s Legal to Kill You,” Lowering the Bar (Dec. 21, 2011) (I was kidding; it didn’t explain). But maybe that one is A+ work!

No Suing Your Getaway Driver for Crashing, Court Rules