Police in Washington are asking for help finding the "Duct Tape Bandit," a man suspected of four bank robberies in that state. The man is described as being white, in his mid-20s, about 5-foot-10 with a thin to medium build, and with short, light-brown hair. Also, he has a piece of duct tape on his face: 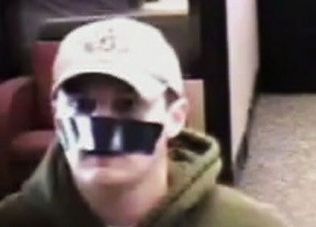 Police caution, however, that the culprit may have removed the tape from his face after the robbery, so I guess that is not really part of the description per se.

While this can't be called a good disguise, it is significantly better than the one deployed by the original Duct Tape Bandit, Kasey Kazee of Ashland, Kentucky (right). In 2007, Kazee was arrested for trying to rob a liquor store after wrapping his head and face in duct tape as shown. The end result is fairly obvious (specifically, he was beaten up, arrested, and later pleaded guilty), but this was never a good idea, at the very least because of the difficulty of removing said disguise during a getaway. As shown, it looks like the Washington copycat (assuming they are two different people, but I think they are) may have learned something from Kazee's example.

Kazee's legacy is also preserved in this excellent remix that incorporates something Kazee apparently said in an interview ("I'm not no duct tape bandit") as well as news commentary, making a pretty good rap song out of it.

As for DTB II, police are also saying that he "may have a tattoo on the inside of his left leg," but aren't saying how they know that or if they are going to ask you how you know that, if you do.