Still no ruling in the lawsuit by the guy claiming he owns 400 acres of land in Twiggs County, Georgia, despite apparently having zero evidence to prove that. According to this more recent local report, the residents whose homes are threatened by this will have to wait at least two weeks to learn the result; the special master is not expected to make a recommendation to the judge until September.

Based on these reports, it's still not clear to me what Evans's legal argument in support of his claim really is. As I mentioned previously, his family may have owned the land in Civil War times but apparently no member of the family has even lived in the county since 1931. Even if he could prove the original family ownership without the deeds that were (according to Evans) so lamentably destroyed in the 1901 courthouse fire, I don't see how he could get around the doctrine of adverse possession or, probably, the statute of limitations. Not surprisingly the reports don't go into this much detail, so that is still a puzzle.

They do, however, support a hypothesis that Mr. Evans is kind of a dick.

Reached for comment by a local TV station after he returned to Colorado, Evans said he was sure he had won the case and that he'd be giving the current residents (who he called "occupiers") a full seven days to pack up and get out once the judge agrees with him. He reportedly claimed that the seven-day limit was set by Georgia law, but I'm pretty sure that's wrong. According to this, in Georgia a tenant has seven days to respond to a "dispossessory affidavit"—if they just defaulted, then the sheriff could kick them out, but all they'd have to do is answer in order to get more time. Regardless, suggesting that people who have lived somewhere for decades, one of whom currently has a brain tumor, might have to get out in a week is some evidence of dickishness. 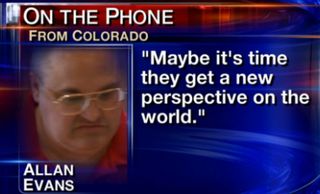 "I'm glad they've enjoyed my family property rent-free all these years," Mr. Grumpy said sarcastically. He said he didn't have a problem about giving people just seven days to get out. "Maybe it's time they get a new perspective on the world," he said.

Speaking of new perspectives, sources report that Evans will be visited by a series of three spirits in the near future, after which he will be seen running around Twiggs County in his stocking cap and joyously telling everyone he'll give them a full 30 days.