You may recall the incident last month in which an elderly parishioner of the Sanctuary of Mercy church near Zaragosa, Spain, decided on her own to try to restore a deteriorating fresco of Jesus, with unfortunate results: 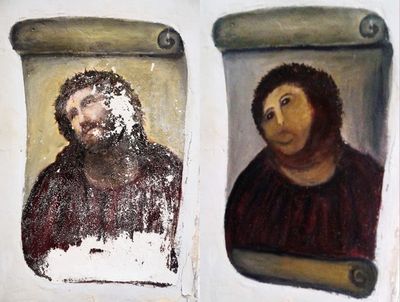 According to one BBC correspondent, the original work, entitled Ecce Homo (Latin for “behold the man”) now “resembles a crayon sketch of a very hairy monkey in an ill-fitting tunic.” Accordingly, some are now calling the revised work Ecce Mono (Latin/Spanish for “behold the monkey”). Officials said they thought the woman had good intentions, and there’s no reason to doubt that. No artistic talent whatsoever, but good intentions.

But her intention now is apparently to get a cut of the tourist dollars her botchery has been generating for the church, because she has lawyered up.

The fresco was previously only of local interest, but Internet coverage of the fresco fiasco has increased traffic dramatically. It’s not clear exactly how many people have made the pilgrimage to see Ecce Mono, but budget airline Ryanair has added some number of additional flights to meet the demand, and the church has reportedly taken in “thousands of euros” at four euros a pop. Having noticed this, the new “artist,” Cecilia Jiménez wants some of that cash. Jiménez has hired a lawyer and is demanding a share of the profits being derived from her destruction of the original painting. According to her lawyer, she plans to donate her cut to charity and only wants to make sure the church “follows the law” with regard to the money. Those may very well be her plans, but I think we’ve seen how her plans turn out.

The claim seems to be based on copyright, and I know something about that but not enough to know whether you can claim royalties if your spin on the original work involved destroying the original work.

Robbery Tip #147: Don’t Leave Your Gun on the Counter