Samuel Mullet, leader of what has been variously described as a "sect," a "cult," and an "Amish beard-cutting mob," was convicted on Thursday along with his children and 11 other family members and followers. The Mullet Mob was charged with federal hate crimes and conspiracy for a string of crimes in which they assaulted other Ohio Amish and forcibly cut off their beards.

While there is no evidence that any of the victims was forced to eat his own beard, the crimes were still more heinous than they may sound because of the religious significance of long hair to the Amish. 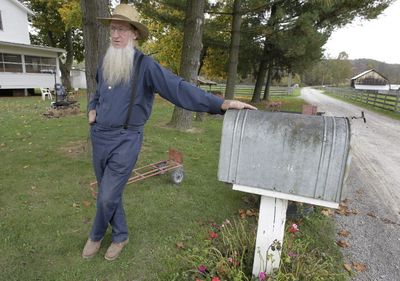 Waiting in vain for fan mail

Prosecutors argued that Mullet ruled his sect/cult/mob (of 18 families in total) autocratically, and directed his followers to attack members of other Amish communities who opposed him. The group conducted at least five nighttime shaving raids during its "campaign of terror," and prosecutors managed to convince the jury that the religious aspect of the assaults warranted punishing them under the federal hate-crime law.

The defense did not call any witnesses, but rather argued that the defendants had simply been trying to compel the victims to return to a "more conservative Amish lifestyle," and so were motivated by "love and compassion," not hate. That didn't work, maybe in part because witnesses testified that Mullet's view of the proper "Amish lifestyle" includes censoring everyone else's mail, locking people in chicken coops, and offering "marital counseling" to the young married women, a program that involved requiring them to have sex with Sam Mullet. (Hence the neighbors' objections.) Oh, also ordering mob hits on his opponents' beards.

Sentencing has been set for January 24. Defense attorneys said they expected that their male clients would be able to keep their long beards during their (possibly also long) sentences in federal prison, and they probably will.

I have mentioned this case at least once before, partly because of the very unusual facts and partly because of what may have been the worst Commerce Clause argument ever made, namely that the attacks (which took place in Ohio) involved "interstate commerce" because the scissors they used were made in New York. (Prosecutors included that howler in the indictments, and the defendants cited it as part of a failed effort to argue that the federal hate-crime statute is unconstitutional.) Will that argument be part of Mullet's appeal? We can only hope so.

No Questions Again This Term from Justice Thomas