That the world is chock full of dumbasses of every creed is proven not only by the few who made the ridiculous and offensive Innocence of Muhammad video but also by the many who seem to blame every single American and/or Christian for it. It is further proven by those in the latter group who burned down a KFC restaurant in Lebanon the other day: 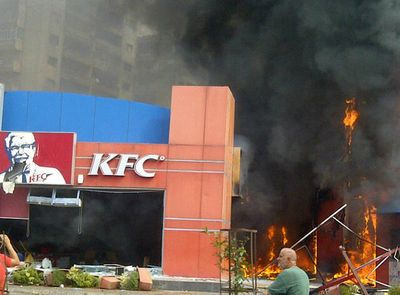 As a commenter on that blog pointed out, the restaurant they burned down was almost certainly a franchise owned by a local businessperson, not something owned by or run from the United States. On the other hand, it does have Col. Sanders on it, so maybe they thought it was the U.S. Embassy.

I'm told that "yaskout yaskout" means "down with" in Arabic, which seems like something that might be useful to know these days in case there's any chanting in your neighborhood. (Thanks @ashrafkhalil for the translation.)

NOTE: Trying to Blow Up an ATM Could Backfire