Agreement made between Harper and Brothers of the city of New York, Publishers, of the one part and Herman Melville of Pittsfield Massachusets [sic] of the other part, witnesseth— That the said Harper and Brothers have agreed to publish and sell and keep for sale a certain work entitled “The Whale” whereof the said Herman Melville is the author upon the following terms … 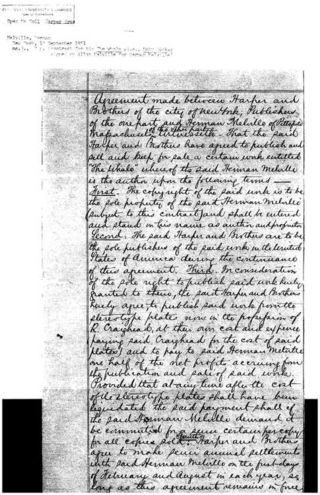 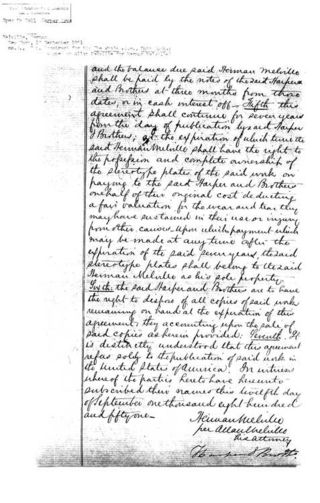 HarperCollins posted this on October 18, which was the 161st anniversary of that certain work entitled “The Whale” but commonly known as “Moby Dick.” The contract provided that the said Herman Melville would get half the net profits from the sale of said book in the United States for the next seven years, although once the publisher had recovered the cost of the plates used to print it, Melville could have the terms changed so he would get a “sum certain” for each copy sold.

Notice that Herman was represented by his brother, Allan, who it appears was an attorney.

“Half the net profits” sounds like a pretty good deal these days, and maybe it was then, too, but sadly Moby Dick did not sell very well during Melville’s lifetime. Melville’s first two books sold well, but it was mostly downhill from there. According to this source, Melville earned a grand total of $556.37 (less than $16,000 in today’s dollars) for the U.S. edition of Moby Dick (3,215 copies sold). And I assume that’s over the seven-year duration of the contract above. He earned another $700 or so from selling the copyright for use in the UK, but gradually publishers lost interest in his work and he ended up working as a customs inspector.

When he died in 1891, the New York Times misspelled Moby Dick:

The book became just slightly more popular after his death.

Moby Dick was one of the works featured in “If Great Literary Works Had Been Written by Lawyers,” which I wrote a while back for The Green Bag law review. There it was called Moby Dick, or, “The Whale” (A Narrative About, But Not Necessarily Limited to, the Species Enumerated at 50 C.F.R. § 224.101(b)(xiv). I was going to say that might have been the title if Allan had written it instead of Herman, but looking at the contract, Allan seems to have been a pretty decent writer.

It’s My Cousin Vinny Week at Abnormal Use