I don't know much about employment law, but I do know this: If you're the captain of a cruise ship and this happens: 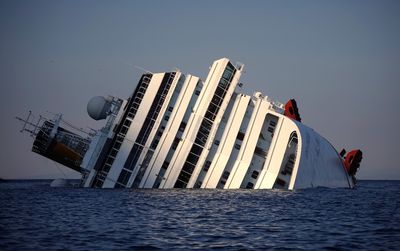 … you probably can't complain too much about getting fired.

Which has not stopped the ex-captain of the Costa Concordia, Francesco Schettino, from reportedly suing Costa Cruises for wrongful termination. As you may recall, there were a few questions about whether Schettino's conduct was entirely up to snuff on the night of the accident. First, there was the whole running-into-a-rock problem, of course, but he was also criticized for then fleeing the ship before all the passengers were evacuated.

"Get the %$&@ back on board!" a Coast Guard official told Schettino by radio, after realizing Schettino had taken his call from a lifeboat and seemed to have no intention at all of getting back on the ship. Schettino claimed he was "co-ordinating" rescue efforts from his lifeboat, and later told investigators that he had only been in the lifeboat by accident.

"I was trying to get people to get into the boats in an orderly fashion," he told the magistrates, when "suddenly, since the ship was at a 60 to 70 degree angle, I tripped and I ended up in one of the boats. That's how I found myself there." He must also have hit his head or suffered some other injury that rendered him unable to climb a ladder in order to get back aboard, although I don't see any mention of that here.

So far there don't seem to be many details available about why Schettino alleges he was wrongfully terminated, but I suppose it really doesn't matter.

Fight Breaks Out in Alabama Legislature