According to KOMO in Des Moines (via Boing Boing), Joshua Pinney walked into a Bank of America branch there on June 26, said he needed a new debit card and explained his utter lack of resemblance to the picture on his ID by saying he had recently been in an accident. The report continues, "The bank’s branch manager immediately determined the costume was fake and called police." 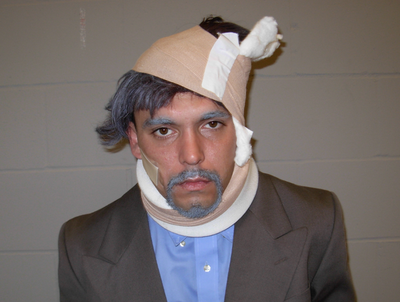 Yes, I may appear to have been bandaged by a 4-year-old,
but at least my facial hair has been amateurishly dyed gray

The owner of the ID had recently lost it when his car was stolen, and had asked the bank to flag the account. Confronted by police, Pinney stuck with his story, but not for very long:

The police officer looked at the Oregon ID that Pinney had given the bank manager and asked the man if he was seriously trying to pass as the man in the picture. Court documents report Pinney hung his head and said "I know."

You probably think this story can't get more pathetic than that, but it does (slightly) because he then claimed that his girlfriend made him do it:

Pinney admitted to [unsurprised] police that his bandages were not real and that he had not been in an accident. He said the entire scheme was his girlfriend’s idea and that she had been waiting outside for him when he entered the bank…. Pinney claimed he met his girlfriend while on work release from prison last year and told police she was a "computer whiz" and could open bank accounts online.

I guess it never dawned on him that if that was true, she wouldn't need to dress him up and send him into the bank personally.

Maybe it was her way of breaking up with him? Some people have trouble saying that kind of thing.