Daniel Casillo, the stranded jet skier who walked through the über-high-tech security system at JFK Airport without being detected, has pleaded guilty to misdemeanor trespassing charges but is also suing the Port Authority for alleged mistreatment. The Port Authority is denying Casillo's allegations, but what is undeniable is the sheer level of bullshit involved in charging this guy with a crime at all.

As you may recall, Casillo and some friends had been riding jet skis in Jamaica Bay one night in August when Casillo's jet ski broke down. See "$100 Million Security System Breached by Drunken Jet Skier," Lowering the Bar (Aug. 13, 2012) (they had also been drinking). He said the only landmark he could see was the brightly-lit control tower at JFK, so he swam toward that. (I recommend you watch the video from which the image below is taken, courtesy of ABC News, because it both provides useful background and contains a completely ridiculous animation of a guy swimming toward shore.) 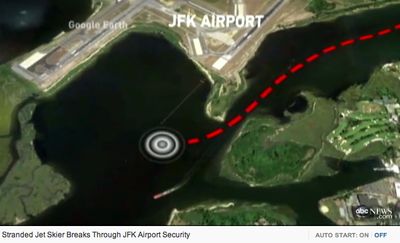 Casillo said he hoped somebody would notice him when he got to the perimeter fence, but nobody did. He climbed the fence, still wearing his bright-yellow life jacket, and still undetected. He walked across two runways, past cameras and motion detectors, and still nobody noticed him until he walked right up to a cargo worker to ask for help. "The whole intention the whole time was to make myself seen," Casillo told ABC, but he was unsuccessful.

Having paid for, developed, and installed a $100-million anti-terrorist system that turned out to be unable to detect a civilian trying to be seen, officials responded in the natural way: they punished the innocent civilian who made them look bad. Casillo was charged with felony trespassing, even though he posed no threat at all, nobody questions his story (except for the alleged mistreatment), and his only alternative to climbing the fence would have been to walk for miles around the airport, still trying to be seen. He was allowed to plead to a misdemeanor, making him, as ABC put it, "the only one to pay for a startling breakdown in security."

This is not new, since there is already plenty of evidence that all this security spending makes us no more secure but does increase the risk that innocent citizens will be hassled for no reason, or busted for something like this. Not new, but still ridiculous.

Judge Admonished About Cheering for Seahawks