Police in Melbourne say they believe the four Smurf impostors, three of whom are seen below in a 7-Eleven security-cam photo, assaulted a man about 1 a.m. on December 16 after first asking him for a cigarette. 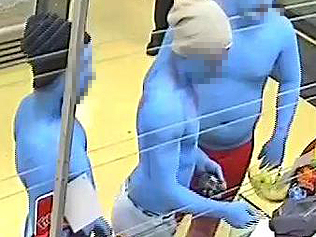 A quick search did not uncover any Smurf-related events in Melbourne on that date, so (1) the reason for the Smurfage remains unknown to me, and (2) it may be difficult for the defendants to argue mistaken identity. (This older report features a video clip—it dates back to December, when police were still claiming that the Smurfs were only being sought as material witnesses.)

I also couldn't find any existing bands named "Gang of Smurfs," so I would highly recommend somebody jump on that.