In a development that shocked no one, including him, Jonathan Frieman did not prevail yesterday in Marin County Superior Court. As I mentioned earlier, Frieman argues that he was not "alone" in his car when using the carpool-only lane, for which he was ticketed in October, because he had corporate papers sitting on the passenger seat. If corporations are "people," he says, then there were two people in the car.

It wasn't just good luck that Frieman happened to have picked up a corporation that day, possibly some raggedy-ass Internet startup hitching a ride into SF because they don't allow skateboards on the highway. According to the San Francisco Chronicle, he has been driving around with his papers in the front seat for more than a decade now, constantly hoping to get pulled over while using the carpool lane so he could make this argument. (Note: apparently you may be able to get away with this for more than a decade.) Yesterday, the big day finally came.

As that suggests, Frieman's goal is to publicly call corporate power into question, which he did, not so much to avoid the fine, which he didn't. Pointing out that the goal of the law is to reduce traffic congestion, the hearing officer ruled that sharing a ride with corporate papers does not achieve that, and so Frieman and Frieman's Friend, Inc. (actually a nonprofit called "JoMiJo Foundation"), did not have the right to be in the carpool lane. 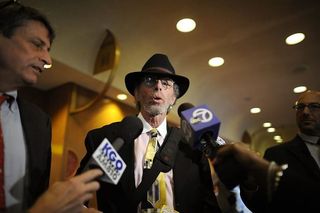 Not the tie of a man expecting to win
(Photo: Michael Short/SF Chronicle)

Frieman also had to concede that the corporation was not wearing its seatbelt, which is required under California law. "Would you buckle up your imaginary friend?" he asked. "That's what corporations are." Yes, but that torpedoes his own (theoretical) legal argument that if imaginary friends count as "people" for some legal purposes (see, e.g., Citizens United) then they must count as "people" for all purposes. If that's true, some wise guy suggested, then his friend needed to be wearing its corporate seatbelt.

Actually, maybe not. Strictly speaking, California's mandatory seatbelt law would apply regardless of the answer regarding corporate personhood: "A person shall not operate a motor vehicle on a highway unless that person and all passengers 16 years of age or over are properly restrained by a safety belt." Cal. Veh. Code § 27315(d)(1) (stupid emphasis added). Clearly, "passengers" must be restrained whether or not they are "people," so if corporations could be passengers in California then they would have to wear seatbelts. But in this case, JoMiJo was incorporated in 1999 and so is less than 16 years old. That would ordinarily trigger section 27360.5, which requires drivers to ensure that someone between 8 and 16 is wearing a seatbelt, but that section uses the phrase "child or ward," not "person" or "passenger." To my knowledge, no one argues corporations are "children" or legal wards, so I would argue that Frieman didn't need to make sure his friend was strapped in.

I realize he did not get a ticket for that. I just offer it for future reference.

In a final non-shocking development, Frieman said he would appeal.

BREAKING: Officers Do Not Kill Suspect