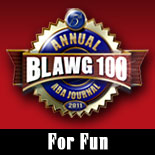 The ABA Journal has announced the results of the reader vote in the "Blawg 100," and I'm happy to announce that Lowering the Bar won in the "Fun" category for the second year in a row. Is this a fully democratic and statistically significant determination of which blog has been scientifically determined to be the best and most "fun"? Yes. Yes it absolutely is. There is no question.

Okay, it isn't. There are lots of other excellent blogs out there, including the others in the "Fun" category, and this is the kind of thing where maybe 200 or 300 votes (let's say, 217) is enough to win a particular category. Since at last count there were well over 1,000 lawyers in America and more than twice that many people using the "Internet," in percentage terms this is not a ginormous sample. ("Quite bogus," says one commenter at the ABA site, and he has a point.) Still, the fact that 217 very busy people (216 of whom were not me) were motivated and generous enough to take the time to register and cast a vote for this blog is something, and something that I very much appreciate. Thanks again to everyone for reading, though, whether you voted or not. Your clicks (and kind emails) are also votes, although I'm the only one counting them.

Also, don't not read the other officially fun law blogs: Law and the Multiverse, Supreme Court Haiku Reporter, Allison Leotta, zombielaw, and The Namby Pamby. All are great. The Multiverse guys and Allison Leotta also have books out (all which I have read and recommend), and zombielaw has Kickstarter funding for a book. (I have two books in progress—in hindsight, writing one with each hand at the same time maybe was not the best idea—and am determined to get at least one of them out this year. Advance plug complete.) This alone is probably more legal-themed fun than you might have thought existed, and that's not even counting the blogs in other categories that are sufficiently fun that I was glad to see them in other categories (Above the Law, Popehat, and Abnormal Use among them), let alone those who were unfairly passed over entirely. (I'm talking about you, Orly Taitz! No I'm not.)

Okay, enough plugging and blogrolling. There are more stupid things that must be chronicled, and they ain't gonna chronicle themselves.