Well, Tuesday was January 1, traditionally seen in Western cultures as the beginning of a “new year” and treated as some sort of dividing line between “now” and what has gone before, even though time is continuous and so any such line is necessarily an arbitrary intellectual construct, so that seems like as good a reason as any to clean out my draft folder. This resolution will probably last as long as most of them do, but I’ll give it a shot.

This particular story is ancient (in Internet terms) but I’m going to post it anyway. The pictures alone I think are reason enough.

In 2004, a man who portrayed Tigger at Disney World was acquitted of charges that he (while dressed as Tigger) had groped a 13-year-old girl at the park. The jury was back in less than an hour, finding that plaintiffs had no evidence to support their claim and could not even prove who was actually the Tigger in question on that particular day. According to this great piece by William Saletan at Slate, “the case seems to have been a total scam.”

The jurors claimed they were not swayed by the defense attorney’s use of a Tigger costume as a prop during closing argument. Actually, “prop” may not be the right word, because the attorney actually put on the costume, as these pictures demonstrate, hoping to show jurors that the costume severely limits the wearer’s peripheral vision and arm movements, making it much more likely that any contact was inadvertent.

Is it easy to get a Tigger suit if you need to use one as an exhibit at trial? Well, maybe not for you and me. But in this case, it doesn’t seem to have mattered, because according to this report the defense attorney “also moonlights as Tigger and Goofy at Walt Disney World.” Note to aspiring lawyers: you probably should not expect that your interests will always align this closely with those of your clients, but it is nice when it happens. 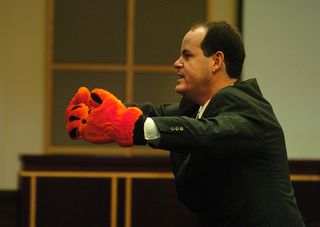 I’m not sure this particular gesture helped

This was in the news again in 2010, which I think was when I saw it, and that was also when Saletan wrote about it. It came up then because a woman was making similar allegations against another character at the same park. See Magolon v. Walt Disney Parks and Resorts, LLC, No. 2:10-cv-03937-JP (Penn. Ct. Common Pleas, filed Aug. 8, 2010) (alleging Donald Duck groped her and then made gestures allegedly “indicating he had done something wrong”). As Saletan pointed out, similar allegations are made from time to time, and are generally followed by a couple dozen similar complaints. Are these examples of victims finally coming forward to report long-suppressed memories of mascot abuse? There is reason to think not:

The reason I know about the Tigger episode [Saletan wrote] is that I learned about it from Elizabeth Loftus, a scientist who plants and studies false memories. I was writing a series about her (you can read it here) and came across a discussion of the Tigger story in a paper she and her colleagues published two years ago [in 2008]. In their first experiment, they persuaded 16 percent of their subjects that these subjects had met Bugs Bunny at Disneyland. This was certainly a false memory, since Bugs wasn’t a Disney character. In their second experiment, Loftus and her collaborators convinced 30 percent of another group of subjects that Pluto had licked their ears at Disneyland. The researchers planted this memory by showing subjects a fake newspaper article about a Pluto character who had “developed a habit of inappropriately licking the ears of many young visitors with his large fabric tongue.”

Based on the Pluto experiment, Loftus and her colleagues speculated that the initial coverage of Tigger’s arrest might have led people “to become more confident that they too had an inappropriate experience with the Tigger character.… Thus unsurprisingly, after the allegation surfaced, 24 additional Disney visitors came forward to say that they too were abused by Tigger.” [None of those Tigger accusers seem to have prevailed, either.]

I still wouldn’t turn my back on Goofy, I don’t think, but this is a reminder that we shouldn’t rush to judgment.

UPDATED AGAIN: Lawyer Has Client Tasered; Says He “Had No Choice”

Japanese Candidate Says He Will Win By Outliving Opponents

Get a Smell at These Emails