According to officers at the West Midlands Police Station in the UK, the Crown Prosecution Service repeatedly insisted on getting a written statement from "Police Constable Peach" despite having repeatedly been told that "PC Peach" was actually PD (Police Dog) Peach, and therefore not well-suited to offer testimony in writing. Finally, the requested statement appeared: 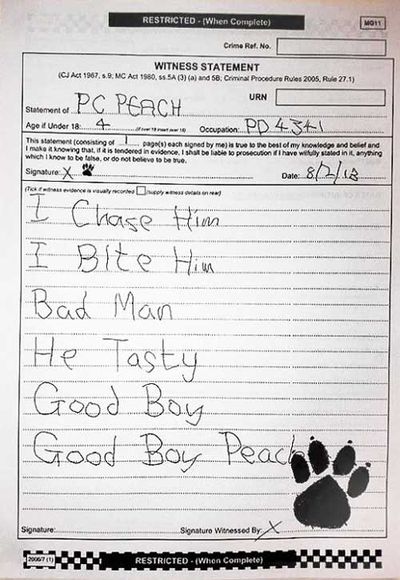 The statement wasn't actually sent to the CPS, but was put up on the wall of the station, and CPS became aware of it after pictures appeared on Twitter and Facebook.

For some reason, probably one linked to a severe humor deficit at some level of the CPS, the matter has been referred to the Professional Standards Department for investigation. A West Midlands detective told the Huffington Post that "early enquiries suggest it is a light-hearted exchange as a result of a misunderstanding around a police dog and a police officer," which I guess at least solves the mystery of how he got promoted to detective.

Buy Some of Bernie Madoff’s Stupid Crap This Weekend

Just Say No to Internal Checkpoints. Preferably After Breathing Helium.