It has tried this before, as you may recall, and that didn't really turn out so well. That time was also much more of a serious group effort, whereas at least so far this is just a resolution sponsored by a handful of state legislators. So I think it is fair to say that this is not likely to succeed, either.

The resolution—which, no kidding, was introduced on April 1 but passed a first reading on April 2 and is not joke legislation—asserts that the U.S. Constitution "does not prohibit states or their subsidiaries from making laws respecting an establishment of religion," and that the state assembly "does not recognize federal court rulings which prohibit [state entities] from making laws respecting an establishment of religion." This was filed at the request of commissioners in Rowan County, who are currently defendants in a lawsuit brought by the ACLU on behalf of citizens who object to Christian prayers being part of official meetings. The resolution notes that the First Amendment only applies to "Congress"—which is true—and that the states can therefore ignore the Establishment Clause—which is not.

This part is not lunacy, because it actually wasn't until the 20th century that the U.S. Supreme Court held that the Bill of Rights (most of it) applies to the states. Although it doesn't apply directly, the Court has held that the 14th Amendment "incorporates" most of it through the Due Process Clause. See Everson v. Board of Education of Ewing, 330 U.S. 1 (1947) (holding 14th Amendment incorporated the First Amendment's Establishment Clause). Everson was a 5-4 decision, so obviously people can disagree about that, but that's what the Court has held.

And this is where the resolution (which fails to mention the 14th Amendment) goes off the rails, because it declares that "each state in the union is sovereign and may independently determine how that state may make laws respecting an establishment of religion," and that if there are pesky federal court rulings to the contrary, North Carolina "does not recognize" them.

Problem is, they recognize North Carolina.

Unless we are repealing the Supremacy Clause:

This Constitution, and the laws of the United States which shall be made in pursuance thereof … shall be the supreme law of the land; and the judges in every state shall be bound thereby, anything in the Constitution or laws of any State to the contrary notwithstanding.

which looks like a problem, and also ignoring Marbury v. Madison, which the Supreme Court still seems to think is important: 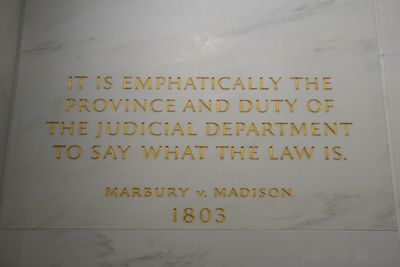 On the other hand, surely a legislator wouldn't spend time on legislation he didn't expect to go anywhere. "I didn't expect it to go anywhere," Rep. Harry Warren told reporters, saying it was more of a show of support for Rowan County. He noted that it had been referred to the Rules Committee, which he clearly assumed would quietly dispose of the problem for him. "Quite often bills go there and never come out," he said.

Still, sometimes they claw their way out of the grave, like HB 819, North Carolina's effort to pass a law declaring that the sea level will not rise faster than the historical rate (whether it actually does or not). A somewhat-less-goofy version of that bill actually passed, but I'm guessing this one will be buried a lot deeper.

Egypt Says It Will Copyright Pyramids