From yesterday's edition of The Hill:

The Obama administration on Wednesday is expected to grant members of the Senate Judiciary Committee access to its legal justification for killing suspected terrorists who are U.S. citizens.

Yep, after months of asking, the Committee will finally be granted a chance to see the still-secret legal memo rumored to explain the administration's basis for arguing that it can lawfully target and kill—without a warrant or trial—any United States citizen that it deems to be a terrorist. Only members of the House and Senate Intelligence Committees have seen it so far.

I agree with this decision. Since the Constitution gives Congress the power to, among other things, "define and punish … Offences against the Law of Nations;" to "declare War … and make Rules concerning Captures on Land and Water," to "raise and support Armies," and to "provide for calling forth the Militia to … suppress Insurrections and repel Invasions," and given the existence of the Fourth and Fifth Amendment protections against government intrusion and stuff like that there, it does seem to make some sense that the Executive Branch would LET CONGRESS TAKE A PEEK AT ITS LEGAL REASONS FOR CLAIMING THE ABILITY TO KILL AMERICANS WITHOUT DUE PROCESS OR JUDICIAL REVIEW.

But that's just me.

On Twitter, @aves1234 noted the irony of this ad appearing next to the story on The Hill's web page: 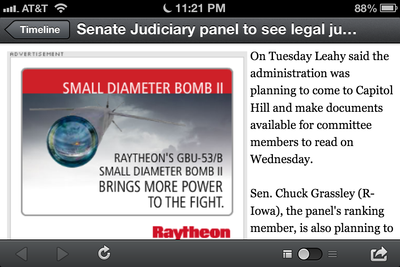 That's a bomb, not a drone, but will almost certainly be mounted on drones when available and then dropped on appropriate targets, which, again, the memo reportedly says can legally include U.S. citizens. (As before, this should not necessarily be taken to mean I think we can or should freely bomb non-citizens.)

On the bright side, it's a small-diameter bomb, so maybe it won't be so bad.

Previous semi-rants on related topics include:

ABA Demotes Gonzales from “Lawyer” to “Newsmaker” of the Year