Actually, the pastry-gun incident (see below) hasn't ended yet, but however that ends it will still be worse.

The "New Development[] in Lego Gun Incident" reported by WGGB (Springfield, MA) yesterday was that the school decided it would not discipline the six-year-old boy who got in trouble for having a Lego-sized toy gun. 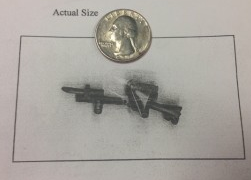 Reportedly, the boy brought the tiny piece of plastic that sort of looks like an assault rifle onto the school bus, and another student told the driver. According to the boy's mother, the bus driver "said he caused quite a disturbance on the bus and that the children were traumatized." The school sent a letter home (from which that image is taken) stressing that there was never any danger, but still initially said the boy would have to write a letter of apology to the driver and serve detention.

The "new development" followed a viewing of the bus surveillance video (sadly, I guess that is a thing now) which showed no actual disturbance or trauma of any kind. "There is no issue here," said the chair of the local school committee. "There's going to be no disciplinary action taken. This is not a story and you can quote me." Well, it's not a story anymore.

As you may recall (it caused quite a disturbance and legal-humor bloggers were traumatized), in that case a seven-year-old was suspended because he took bites out of a pastry until it resembled a gun, thus invoking the zero-sense-tolerance policy. In that case, common sense has not prevailed.

The pastry-wielder was required to serve the suspension, but the family has since been pursuing an appeal trying to get the incident expunged from his record. Does it matter? It might. "Who knows what doubt he's not going to be given the benefit of later?" the attorney was quoted as saying. Whatever that means, he should know, because it is apparently the fourth such non-weapon case he has handled.

On May 15, the Baltimore Sun reported that the two sides had met with no resolution. According to the attorney, school officials said they would not expunge the record but offered to change the wording of the suspension, an offer that was rejected. The school district's spokesman would not even confirm there had been a meeting, although if there hadn't been he probably wouldn't have been so upset that the attorney talked about it.

"This is a student-specific matter," the spokesman said, in case anyone thought they had suspended every student in the district, "and our school system is not going to have any comment on it, except for this: This is a matter between the school, a student and his parents. It's not, and it should not be, fodder for a publicity stunt by an attorney who seems to believe that his young client's best interests are somehow served by trying this case in the media." News flash: this has been in the media since long before they ever had an attorney, and that is not their fault.

The next step was said to be an appeal to the superintendent of schools, so the battle continues.

Shortly after this incident, a state legislator introduced a bill that would have precluded discipline for gun-seeming things that aren't guns unless they are actually used in a "direct act of violence" (presumably by hitting someone with them). That has been sitting in committee since March 20, so common sense may be dying a slow death there as well.

Utility Pole in Middle of Road Is “Unacceptable,” Spokesman Admits