As you may recall, John Brennan took off all his clothes last April at an airport checkpoint in Portland to protest being hassled by the TSA (they got a false positive on that swab test), and was then charged with indecent exposure. See "TSA: Wants to See You Naked, Complains When You Get That Way," Lowering the Bar (Apr. 18, 2012).  He was acquitted in July after a state judge found that his action was "symbolic nudity" of the kind that Oregon cases have held is constitutionally protected.

Well, if he was acquitted on constitutional grounds, why does he need to appeal? First, because he's not appealing the state criminal charge, he's appealing a $1,000 civil fine the TSA imposed on him; and second, because the TSA cares more about its own authority than about the Constitution. 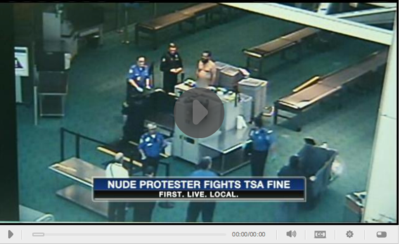 Who's interfering with whom again? (image: KPTV)

The TSA has charged Brennan with violating a regulation that says "No person may interfere with, assault, or intimidate screening personnel in the performance of their screening duties." 49 C.F.R. § 1540.109. Brennan didn't assault anyone, and if the TSA can be "intimidated" by a calm, motionless naked man, then God forbid they should ever have to deal with an actual terrorist. So they are arguing that he "interfered" with screening operations when he took his clothes off.

This report speeds up the video and makes it easier to see that the only thing "interfering" with screening operations was the TSA agents' decision that it was more important to hassle him while running around finding stuff to shield the public from his nudity than to just clear him and get back to their jobs. This is the same argument some cops use when they arrest people for taking videos or pictures of them doing something questionable, and it's bogus here too. Since photography is not a crime, police should hardly be able to interrupt what they were doing to hassle the photographer and then claim he interfered with them because of a decision they made. That point is even more valid here, since as previously discussed TSA agents have no law-enforcement function. None. Once it was clear that Brennan was not carrying any weapons or explosives—or at least, there was only one place left he could have been hiding them, and they don't look there anyway—the TSA's role ended and it should have sent him on his way. This "interference" argument is just bootstrapping, and is being used as an excuse to punish someone who challenged TSA authority.

There is a previous case in which this regulation has been challenged on First Amendment grounds, the argument on which Brennan prevailed in state court. Rendon v. Transportation Security Admin., 424 F.3d 475 (6th Cir. 2005). In that case, Rendon also protested TSA bullshit, which he loudly and belligerently declared to be bullshit while still at the checkpoint. As in Brennan's case, the TSA agent then stopped his screening line to call his supervisor and then a police officer, and the agency later argued that this qualified as "interference." Rendon argued that the regulation was unconstitutional because, just as in his case, it allowed punishment based on speech (profanity is still protected speech if you're using it to protest). He lost.

The Sixth Circuit held in part that the regulation was not overbroad because it only prohibits conduct that "interferes," and is interpreted to prohibit only conduct that poses "an actual hindrance to the accomplishment of a specified task." I don't buy that result. Again, I don't see how Rendon or Brennan hindered the screeners. Had the TSA just cleared them, there'd have been no reason to stop the line. In both cases the TSA stopped the line, and later punished the traveler, just because the agent didn't like the traveler's attitude, not because he was hindering them. That should be unconstitutional.

But Brennan and his lawyer, Robert Callahan, won't be able to bring up the Constitution tomorrow, because the first step in challenging the fine is a hearing before an administrative law judge, and for a reason that's still not clear to me, the ALJ will not or cannot rule on constitutional issues. The proceeding may be limited to factual determinations. (There will be testimony — in fact, I am told that the TSA has seven agents and two police officers on its witness list. All of whom will likely just say "the naked man was interfering," or words to that effect, over and over.) The con-law defenses will have to be raised on appeal if Brennan loses this week.

The hearing is Tuesday at 9 a.m., at the U.S. Bankruptcy Court in Portland (ninth floor, Courtroom 2). The TSA persuaded the judge to keep out cameras, but the hearing is still open to the public. If you do attend, please wear clothes. You may have a First Amendment right to be naked, but let's fight one battle at a time, please.