On the other hand, it could get significantly worse: 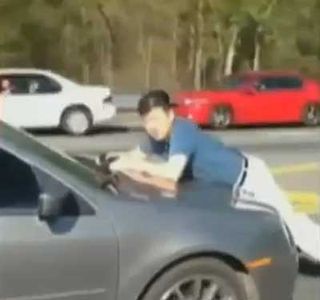 Nothing to see here

Just to be clear, that car is not parked. It is traveling down a road in Roswell, Georgia, at what I would guess is around 45 mph. The hood ornament is a Mr. Elton Kim, who saw the driver of said car back into his wife’s SUV and unwisely chose to confront the driver. Well, it wasn’t so much the confrontation that was unwise as the location he chose: directly in front of the woman’s car. When she accelerated, Kim jumped onto the hood, and away they went.

This is a time to give thanks for the smartphone, because although whoever took this video technically should not have been doing so while driving, since no one got hurt we can be very glad he did.

“His objective was to have her stop,” said his wife unnecessarily, “not to go for a joyride.” You wouldn’t know it, though, from his demeanor, as he appears to be reasonably calm despite the fact that he is clinging to the hood of a moving car. Granted, it’s not like there was a whole lot he could do physically during that time, but he isn’t screaming or anything like that. I’d like to think he was able to enjoy himself at least to some extent.

He does shout “call the police!” to the guy taking the video (from a car driving alongside), who responds “I will!” but then also shouts back, “Did you call them yet?!” Yes, I just fished out my cellphone and called them with one hand while I was clinging to the hood of this moving car, jackass. I also texted them and did a quick Twitter update. Does it matter? I don’t think the cops’ll be too upset if they get more than one call about somebody clinging to the hood of a moving car, so why don’t you STOP FILMING ME AND CALL THE POLICE?! Unbelievable.

The woman stopped or slowed down after about two miles, and Kim was then able to dismount safely. Police are still looking for the driver, according to Friday’s report.

Police also attempted to discourage people from getting into situations where they might be forced to cling to the hood of a moving car. “Just get a description of the driver, the car, the tag number and let police do their job,” said an officer. “We do not want people to stand in front of a car to prevent it from leaving.”

I guess this might not be a coincidence, if YouTube serves targeted ads, but while I was watching the video above an ad popped up for “Flair Hair,” the novelty visor I wrote about the other day after it was reported to be at the center of a patent dispute. 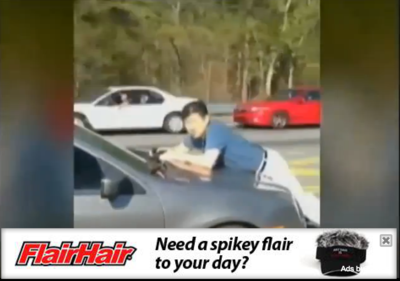 It’s too bad Mr. Kim wasn’t actually wearing one at the time. What a great opportunity for product placement.

Update: A reader sent in a link to this video, which depicts a somewhat similar hood-surfing incident except that it takes place in China and the gentleman riding on the hood is a police officer. You’d think a quick tap on the windshield with a pistol would get the message across almost instantly in those circumstances, but the officer may not have been armed.