Not for slapping his attorney's butt, after slapping it, in sort of an NFL-style congratulatory buttslap for having just gotten him a deal that would have resulted in no jail time. Doing this in view of the judge and spectators turns out to have been a bad idea.

TMZ was there to get the video:

"The whole courtroom was laughing," according to the judge, who unfortunately for Johnson was the one person in the courtroom who wasn't. Saying she did not think he was taking the matter seriously, she rejected the deal on the spot and gave him 30 days for violating probation.

In other words, Ochocinco just got penalized again for excessive celebration. 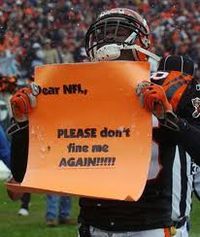 To be fair, based on the video it seems clear he wasn't being disrespectful, at least not intentionally. The judge had just asked him if he was satisfied with his lawyer, he said yes, and she said "you should be" and then complimented the lawyer. In the NFL, if somebody does a good job on the field the practice (for whatever reason) is to swat that guy on the butt. Johnson wasn't being flamboyant about it, but spectators saw it and laughed and that's what set the judge off.

If it hadn't been Chad "Ochocinco" Johnson, it probably would not have triggered such a reaction, but of course it was. Plus, he was only there in the first place because of other stupid actions, the most serious of which was head-butting his wife during an argument last August. He pleaded "no contest" to a domestic-violence charge arising from that incident, which also resulted in his immediate release from the Dolphins as well as his marriage. He didn't play at all last year, though he was still fortunate if all he got was probation on the head-butting charge.

The hearing today was because he had violated that probation by failing to meet with his probation officer during the past three months, which seems especially dumb. The plea deal would have resulted in an extra three months of probation, community service, and counseling, and no jail time, but that was derailed by the buttslap.

The judge also said that it was not the first time Johnson had "behaved that way" in her courtroom, by which I assume she meant not appearing to take things seriously. I'd like to think he wore his sombrero and poncho to court, but if he had he would have been in jail already, most likely.

Follow-Up on the Great “Photocopy” Dispute