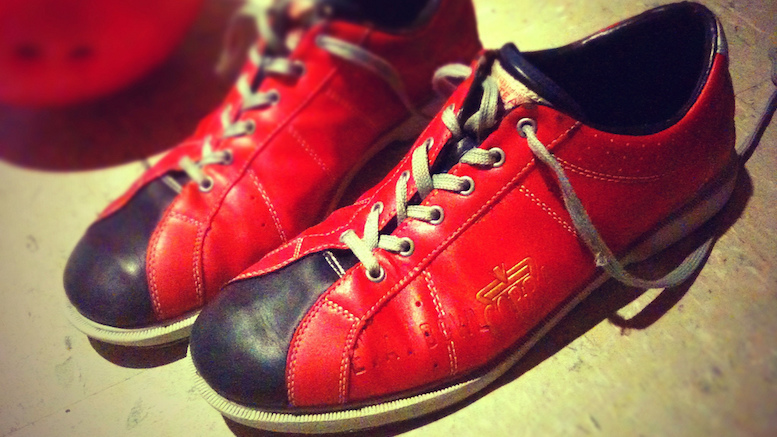 They ARE designed to slide (Image: Eric Grossnickel)

Don’t wear them outside.

The slightly wordier warning that would be required if New York Assembly Bill A04739 passes would read as follows:

DO NOT WEAR BOWLING SHOES OUTSIDE. BOWLING SHOES ARE SPECIALIZED FOOTWEAR FOR INDOOR USE ONLY. BOWLING SHOES WORN OUTSIDE MAY BE AFFECTED BY SUBSTANCES OR MATERIALS INCLUDING BUT NOT LIMITED TO SNOW, ICE, RAIN, MOISTURE, FOOD, OR DEBRIS THAT MAY CAUSE THE PERSON WEARING THE BOWLING SHOES TO SLIP, TRIP, STUMBLE, OR FALL ON THE FLOOR OR ALLEY SURFACES INSIDE THE BOWLING CENTER. NEW YORK LAW MAKES A BOWLING CENTER POSTING THIS NOTICE IMMUNE FROM LIABILITY FOR SUCH AN INJURY.

Under the proposed law, bowling centers—which apparently no longer wish to be known as “alleys”—would be required to post that notice near each entrance and exit in order to warn their patrons of the dangers posed by this specialized but potentially deadly footwear. Is that really necessary? According to this report, sort of, because there has been an increase in lawsuits by people who did wear bowling shoes outside in the rain or snow and then walked back inside and fell down. (Some believe this is an unintended consequence of bans on indoor smoking, the report says.) The remainder of the bill gives bowling alleys—sorry, bowling centers—immunity from such lawsuits provided that they put up the sign.

Why not just give them immunity and not insult the bowling population’s intelligence with signs like this? I don’t know. I’m not opposed to warnings in general but pretty soon the surface of every object in view will be covered with them, and then nobody will pay attention to any of them.

One of the bill’s sponsors admitted that people should know not to do this but still defended the warning requirement. “[T]here are many laws that provide for warnings to people to do what is common sense,” he said, although that is not a reason for having more of those. With the warning, some people “might be reminded that it is unsafe with these particular type of shoes that are designed to slide to begin with.” Yes, but that’s why you don’t need to—oh, never mind.

There is plainly an organized effort under way to establish this immunity nationwide—Illinois passed a nearly identical bill in 2009 and Michigan did the same in 2011. All three states have labeled the legislation “The Bowling Center Act.” I’m fine with the immunity, if lawsuits have made it necessary. I guess I am opposed to making it part of the rebranding effort, if that’s what’s going on. “Bowling alleys” were good enough for Grandma and I don’t see why they need a makeover now.

Police Rapidly Crack the Case of the Stolen GPS Devices

British Court Finds Inherent Right Not to Live in France

Alabama’s Ginormous Constitution Will Be “Recompiled,” Made Less Racist

Hot-Yoga Guy and His Cars Are Missing